A Diet Soda a Day if the ADA has Their Way 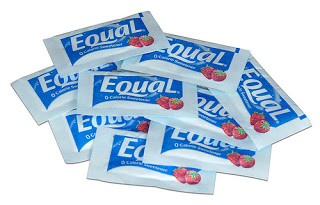 Did you know the average American consumes 22 teaspoons of added sugar a day? At 16 calories per teaspoon, that is adding 352 calories a day. Over a week, that translates to ingesting an additional 2464 calories.  Did you know a 12-ounce can of sugar-sweetened soda contains about 150 calories and 9 teaspoons of sugar? If you are a soda drinker, substituting just one diet soft drink daily for regular soda can save 4500 calories a month with a potential weight loss of about 1 pound per month.
Sounds so logical, right? No, of course it doesn’t. Curious about the source of this nonsense? It’s none other than the American Dietetic Association in an email promoting their publication “the Truth about Artificial Sweeteners or Sugar Substitutes.” While I applaud their mathematics, there are a few things they omitted:
And while the ADA used the word “truth” they really mean the truth according to their corporate sponsors. When you go to the ADA’s sponsorship page they politely list and thank all their best buddies. It’s what you’d expect from our nations bastion of nutrition: Coke (and not to offend Pepsi is there too), Mars, Hershey’s. It’s the equivalent of a pro-illiteracy group building a school. I can’t wait for my next email. “The truth about chocolate”. If you replace that banana with a Hershey’s miniature, you’ll save 3000 calories a month. We’ll have cancer, no teeth and be just as fat.
It’s abundantly clear how I feel about soda. I would have understood if the ADA said something to the effect of “though there’s nothing nutritious about diet soda having one occasionally doesn’t pose huge risks.” Instead they pushed the diet cancer. I hope the Coke and Pepsi send them a nice thank you note. The header of the email sent to ADA members reads, “How should artificial sweeteners be used as part of a healthy eating plan.” Um, they shouldn’t. We can argue about just how much (or in my opinion little) artificial should consumed but let’s not put it in the same sentence as healthy.
What do you think of the ADA’s diet soda plug? Do you consume soda or sweeteners? Are you an ADA member? What do you think ADA members should do if they feel similarly?