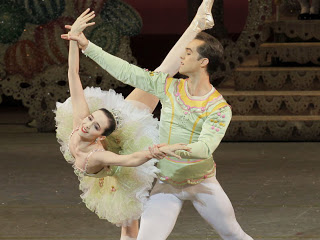 Since Black Swan came out, there seems to be a bit of chatter about dancer’s bodies and anorexia. Do you think the movie may encourage behavior associated with eating disorders? And of course, there is the NYT critic who made the comment that Jennifer Ringer, a dancer in the Nutcracker “ate one two many sugarplums”.  So curious about your thoughts on all of this.
I should say that I haven’t seen the movie Black Swan. A lot has been made about the 2 main characters, Natalie Portman being one of them, losing a tremendous amount of weight for their roles as ballet dancers. Natalie Portman’s character has an eating disorder in the film and from what I’m heard looks gaunt, almost sickly in certain scenes. While the story line doesn’t glorify her eating disorder I will tell you, with certainty, that many will sadly emulate both her weight loss and physique.
Even if it’s mentioned that a certain character or celebrity “almost died” due to their restricting, there will be those taking notes on what they feel is a seminar which may as well be entitled “how to restrict (or binge) and purge.” This was the case with Portia de Rossi’s recent press and book. I cringed as I heard her describe eating 85 (not sure the exact number) calories per day as I new that disclosure would be someone else’s goal.
Black Swan has been picked up by “pro-ana” or pro anorexia sites referred to as “thinspiration” and “eating disorder porn.”  On one hand there are those with eating disorders or a proclivity to develop an eating disorder but I think many other people are unknowingly affected. I don’t think we can deny that images of super skinny women play with our perception of normal. Even hearing that an, already slim, actress loses 20 pounds suggests that she had 20 pounds to lose.
As for the NY Times critic, roles have been reversed and he’s been slammed by many. I’ve heard arguments about the need for diverse body types in ballet, Jennifer Ringer’s “past” eating disorder has been mentioned and the ballerina herself called herself “not fat but womanly.”
I’m really uninformed today because I haven’t seen the Nutcracker this year either. I did watch Jennifer Singer’s today show appearance and clips (like the photo above) of her dancing. I see to evidence of over “sugar pluming” or overweight. I don’t. However, I am going to have to side with Alastair Macaulay, the critic, on this one. Whether we’re paid for it or not, we all judge. We look over the bodies of fitness instructors, professional athletes and our peers. The other issue is that certain professions demand that you’re trim. I joke that if I gained 20 pounds I would be out of a job. If someone is judging their fully clothed nutritionist they are certainly picking apart a dancer in a tutu.
Jennifer Ringer is a grown woman, a mother who most likely has been critiqued her whole life. A part of me worries the message this brouhaha sends to young girls but sadly if girls are in ballet or gymnastics they are hearing a lot of this. If nothing else, the movie and Macaulay have provided the subject matter for us all to discuss these issues.
Have you seen Black Swan or NYC Ballet’s Nutcracker? Do you think that the movie or the critic crossed any lines? Are there sugarplums in real life?