Be Realistic, Give Your Kids Cheetos 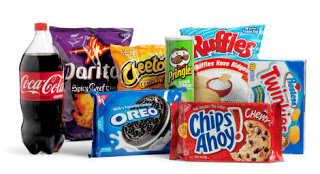 I’ve mentioned Fooducate before. Via a supermarket app and blog, Fooducate exposes helps consumers and readers navigate today’s complicated food maze. In early May, I read a post from a fellow nutrition colleague entitled “My Kid Likes Junk Food and That’s OK” that may have had good intensions but rubbed me the wrong way. The gist of the post was that your kids are going to eat junk food due to media exposure and taste. You can serve quality at food home but you can’t compete with Lunchables’ millions of advertising dollars. Be realistic, you can’t live in a bubble (made of “flax and unrefined flour”) if you child wants Cheetos, so be it.
The timing of this post was interesting; I had just come from my 10-year-old’s check up. At the end of the annual visit our pediatrician has my son leave the office and then discusses milestones for each age. I was told I was going to get questions about lots new subjects at this age. Dr R explained there were two things not to do when fielding questions. “If you’re asked if you’ve ever been drunk you don’t want to dismiss the question or glorify it.” You don’t want to say, “how could you ask such a thing?” or “sure I have and you will too it’s fun.”  Rather, give a little information and move on.  If subtext of the first response is ignore it and it will go away, the second is from the school of “cool parenting”. I see both approaches when it comes to food and they don’t work in this domain either. Even those “cool parents” would think it wildly inappropriate for me to say “I know you’re going to get drunk in the future so here’s a shot of Patron.”
If the intent of “Cheetos are fine” advice is to put parents at ease, I am all for that. However, I think many parents swing way to far the other way in an effort not to be overly restrictive. This was my comment on the Fooducate site.
I like the idea that parents who are new to the healthy table shouldn’t feel it’s too late to make changes. However, I feel part of my boys’ education is teaching them about food, ingredients and health. Though my kids have had Doritos, I don’t need to buy them even “sometimes”. My kids have tortilla chips or chips but they don’t need preservatives, trans fats and food coloring to taste good. I’ve also worked with the grandparents and other family members suggesting alternatives to some of the things served. When approached without judgment, these substitutions have been well received. I get the “kids will have Oreos and soda in their lifetime” argument. I just feel that despite millions of dollars encouraging kids to eat Lunchables we still, as parents of young children, can have more influence.
I’m grateful to some fantastic companies: Purely Elizabeth, Stretch Island, Hint Water, Glow Gluten Free, Food Should Taste Good, Pirate Brands, Vigilant Eats and Pure Bar.  I’ve brought these foods for carpool, to my children’s sports teams and birthday parties. Treats and “fun” food can be a part of childhood. We just don’t have to do PR for soda or Doritos; they already have plenty.
What do you think is the biggest challenge in feeding kids a healthy diet? What do think of givings kids junk so that they don’t feel restricted? Would you buy your children Lunchables if asked?