My boys have been away for a month. I realize sleep away camp is a fairly Northeastern phenomenon. I have friends who don’t live here or didn’t grow up going away to camp who think it’s strange. I could make the case for how great camp is, to be in beautiful surroundings, doing sports all day long, making livelong friends etc. but let’s face it is strange. For two weeks, Facebook has been abuzz with photos of parents and child at the mid-summer visiting day. In these photos, there are smiling faces and happy families but there’s another part of visiting day and that’s the overhyped one-day chance to see your children that feels somewhere between New Years Eve and prison visitation (not that I know what that’s like).
People ask me all the time if I let my kids have junk. My general philosophy is that I don’t bring things into the house with questionable ingredients but that we have chips, ice cream just quality versions. They say absence makes the heart grow fonder but three weeks without my boys led my heart and the rest of me to Dylan’s Candy Bar. Typically, at a place like Dylan’s, I would look for the best options chocolate most likely or something non-neon. I wasn’t myself though, I was operating under the influence of parental guilt and anxiety and so I bought one child gummy sharks, the other gummy bears and it didn’t’ stop there I threw in a blue Yankee lollipop and stopped for chips on the way home. I can make myself feel better or give you some context and say, in their own way, all parents go nuts but I was willing to break every food rule in the state I was in. 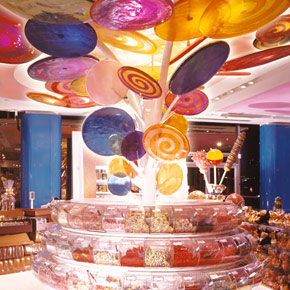 Then there’s the question of camp food. Days before I saw my boys the New York Times ran a story about camp food. Camps, according to them, aren’t serving spaghetti and hamburgers but “cuisine”.  When we arrived, my son was excited to show me the camp’s farm. I was impressed, he told me when he’s hungry he can stop at the farm on the way to his bunk and have a snack like this. 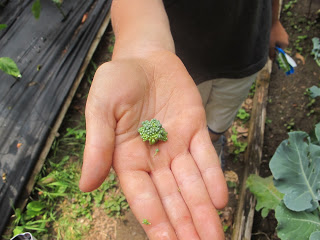 The warm and fuzzy feeling didn’t last, at lunch (salmon and veggies but I was told that they never had that) I spotted something.
My older son was quick to tell me he has only had it two or three times. It’s a pity, he was such a nice nose I’m so sad that’s it’s going to be growing…I may have been away from them for a few weeks but I know when I am being lied to.
As a parent, another of the many strange things about camp is the whole issue of self care. I thought we were good parents, instilling important habits in our children but one of my boys was a mess. Marc said, “I think he’s wearing the same clothes he had on the bus up to camp.” At home, I would’ve been horrified but on this day of rule breaking I ignored it completely. No showers or clean clothes? No problem.

So I’m sorry if you expected smiling pictures of my family. If you’re a Facebook friend maybe I’ll post one. I know we took a few. I just find parents waiting at the gate to see their children with suitcases of food, McDonalds shakes (one mom clutched these like it was a family heirloom) and the strangeness of this so much more interesting.

Did you go away to camp? What kinds of things did your parents bring when they visited? What did you bring this year? What emotions make you break your food rules?
Thank you so much for the amazing response to the Harmless Harvest post, the winner of the giveaway is Amber. We will contact you shortly.