We left New York for Chicago on Friday with a plane full of runners. I know they were runners because 2 days prior to the race passengers were in full running gear sporting sneakers and apparel from previous races. I felt a little left out in clogs, jeans and a sweater. After training for 4-plus months and treating myself like a china doll for the past week sleeping over 8 hours a night and hydrating compulsively, I was ready to go. I flipped through Runners World during the flight and wasn’t that thrilled with an article entitled “The End” which basically served as a reminder (confirmation wouldn’t come for another 2 days) that the end of any marathon is difficult.

We arrived in Chicago to some Obama-related traffic. My sister in law, Jenny,  and I headed directly to the expo to pick up our race numbers and swag bags. If there was any doubt about the race date we were welcomed to McCormick Center by gigantic 10-10-10 banners and thousands of other runners. We watched a virtual tour of the course at the Nike booth, gathered some clif shot samples and headed to dinner with our other 2 team Chicago members. We were short for time and decided to go straight to the restaurant. In we walked to The Publican,  some of us were in sneakers, all of us had our big red and white marathon expo bags. Though discrete on the flight there was suddenly no denying we too were runners, in town for the race. The Publican is a fantastic green market based restaurant with a menu that changes daily. We had a delicious meal that included a beet salad, oysters, mussels, steak and Brussels sprouts all served family stlye. If I’m being totally honest, I will say all members of team Chicago had a beer or glass of wine and the 2 there-for-support husbands had much more. I enjoyed my glass of Gruner, the first alcohol in a week and hoped it would calm some of the pre-race jitters I was starting to feel.

The next morning we took a walk to the starting line. 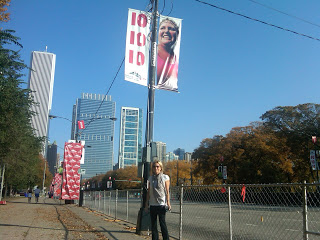 Music was blaring and despite the fact that there wasn’t anyone around, it was pretty exciting. It was hard to picture that same area with 40,000 people crowded in it. We toured around the city, went on the architectural boat tour and to a leisurely lunch (did I mention none of us brought our children) and then back to the room. At the hotel, I did a dress rehearsal trying on my race day outfit: J&J pink tank top, lululemon groovy run shorts (there’s always hoping), Wright “blister proof” running socks (will post a picture of my clearly non blister proof foot tomorrow, consider yourself warned) and Nike sneakers. I pinned on my race number and as Coach Mindy of The Running Center had taught me for my first marathon, I “prepared my altar” for the next morning. 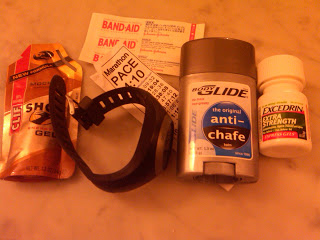 Have you ever run a marathon? If so which one(s)? Do you experience pre-race jitters? Do you wear running clothes on the airplane, be honest.