Do you know where that apple has been? Fruit Washing 101. 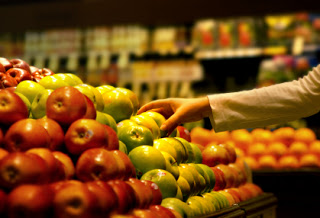 I remember an Oprah episode, which now makes me sad to say, where people were taped coming out of restrooms. Cameras were perched above a bank of sinks and people were recorded “washing their hands.” Some people washed for the proper about of time or the time it takes to sing happy birthday. Others turned on the water, placed their hands underneath and did something that, if my kids tried, would result in a second supervised trip to the sink. And of course, there were some repulsive souls who skipped the sinks altogether. Ew but expected.
I would love a similar sink-cam but I’d  observe peoples fruit-washing. After all, if washing is spotty after the potty I can only imagine the state of raspberry rinsing. I answered a few questions for HGTV magazine that I thought would be good to share.  If you’re like my mother and eat unwashed (conventional!) grapes while you grocery shop or like my husband who “shines” his fruit  with a paper towel versus washing it-see what I’m up against? Read on…
Why is it bad to eat unwashed fruit?
For the same reason you wouldn’t run around on a farm or supermarket and lick your feet. Sorry if that sounds gross but a host of different bacteria have been found on unwashed produce not to mention animal feces. This is responsible for a good deal of food borne illness. Washing produce for 15 seconds (not the 1 second shake under water most people do) can reduce 98% of bacteria.
Does the type of fruit matter?
It doesn’t, you want to wash produce you’re going to peel with a knife as well as fruit where you eat the peel. If you cut a melon or avocado with a knife bacterial can be transferred from the skin to the inside. I also suggest washing pre-washed lettuce. Better safe than salmonella.
Does it matter if the fruits were grown organically?
I would buy organic produce whenever possible.  Conventional produce retains pesticide residues even once washed. For the above reasons, organic produce still needs to be washed.
Where does the bacteria come from?
For starters, from the 20 people who may have touched that apple before you did. Bacteria can also be picked up from the soil in which fruits or veggies grow and from insects on the farm. Reuters reported tests revealed a quarter of a  million microorganisms on unwashed apples in a San Diego grocery store.
What’s the best method to washing your fruit?
For most produce wash under  water for 15 seconds, skip the produce washes and do not soak fruit in a basin of water (this doesn’t wash bacteria away). Fruits with ridges or rinds  such as cantaloupe or squash should be cleaned using a produce brush under water as bacteria can cling to the crevices.
Would you consider this a simple manner of hygiene or a necessity? Why or why not?
Necessity, remember the E. coli outbreaks linked to spinach? It’s not worth it and children or immune compromised adults are especially vulnerable.
Any other notes on washing fruit?
Before you wash your fruit, wash your hands.
What kind of fruit washer are you? Have you thought about where your produce has been? Do you nibble as you eat in the grocery store?  Be honest, as Oprah says when you know better you do better.