There’s something that’s been on my mind lately. It’s not the usual concerns about the kids or my to-do list for work, no its sardines. In Food Rules, Michael Pollan encourages readers to “eat your little fishies.” Sardines have also been named one of the food trends for 2010, one ad agency referred to sardines as “the new tuna.” There’s a reason why sardines are in the spotlight. Sardines, like many other small fish, are low in mercury, they are also high in omega 3’s and plentiful/not overfished. Simply put, sardines are good for you. My only problem? I generally don’t eat them.

Last week, I put the pressure on. I wrote about foods I dislike and vowed to try sardines. I planned to sample sardines in Vermont this past weekend. I purchased 2 different varieties and then forgot (really I did) to pack them with the other groceries. Yesterday became my sardine day. In the morning I dropped my boys at school. Another mother pulled me aside and said “I liked your post on foods you dislike.” I told her I was going to bite the bullet and try sardines. She said “oh I love sardines but only the fresh ones not in the can.” I smiled but panicked. I had purchased 2 types of canned sardines. One of the commenters on the blog had also mentioned, as with most things, that fresh sardines were superior. It’s so sad to admit this but I was getting nervous to eat the sardines.

I did some work at home and actually put the sardines on the kitchen counter to ensure that I ate them. When I went to shower I told my babysitter Louise, who eats sardines all the time, “I am trying sardines today.” “You’ll like them Lauren, they’re pretty good” she assured me in her calm Jamaican accent. As lunchtime approached this was turning into something I hadn’t experienced before. I try new recipes, unusual fruits, condiments and all sorts of food both for business and pleasure. Never before had I been scared to try anything. I was anxious, not unlike the people on that show Fear Factor who eat maggots…but this was just a can of sardines. 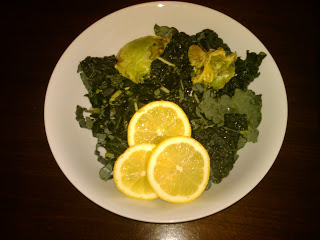 I started my preparations. To calm my nerves I decided I would make a sardine salad. I would combine the sardines with more familiar tastes and ingredients just as I offer my children only one new food at a time. So I chopped some Tuscan kale, in my opinion the best kale to eat raw, sliced ½ avocado and a lemon (food stylist I am not) and then there was just one thing missing. I opened up the can of sardines in Piripiri sauce. Let’s be honest folks, they smell. I told myself tuna smells and I eat my beloved Zoe tuna often. I removed 3 of the 4 sardines in the can and placed them in their kale and avocado bed. I squeezed the lemon slices and added a little olive oil. Stalling, I took my Sur la Table salad choppers out and lightly chopped the ingredients rendering the sardines camouflaged.

I sat at the table, with Louise watching, and took a bite. It was ok, between the lemon and the piri piri and the avocado I wasn’t entirely sure I tasted sardine. I ate some more and it was fine. I did it, I faced my ridiculous fear and sampled sardines. Was it love? I can’t say it was. But it wasn’t terrible. And I would be open to trying fresh sardines and maybe even the sardines with turmeric I still have in the pantry. As I mentioned in the polite bite post, I would give sardines a second date.

I nudge clients to eat more fish or try leafy greens. Do you think, as adults, we should eat certain foods just because they’re good for us?