Healthy Travel- Dos and Don’ts for Airport and Airplane eating 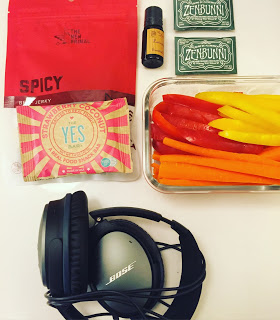 Since I’ve been up since 4:30, (I kind of like Euro jetlag) and it’s fresh in my mind, I thought I’d offer up my two cents on airplane travel with examples from my most recent trip to Amsterdam.
Outbound 8pm flight
I’ll admit, I felt virtuous as I prepped for this trip. With no kids to pack for, it was an opportunity for selfish self-care.  I planned to take Le Pain Quotidien’s frittatas (they boxed them up with sliced avocado) and cut veggies to consume pre flight.  Best-laid plans…while sitting in traffic on the way to JFK, I realized my Eat Play Rose’ bag with frittatas and crudité had stayed home. I called my (yes my babysitter, kids are away) babysitter and she popped it all in the freezer. I still bitched and moaned for the remaining hour to the airport. Marc finally snapped at me, “you’ll live” I wasn’t so sure.
At the airport, I had to forage. Not only was I meal-less but the long-weekend traffic had delayed us. I ended up with a very red onion heavy tuna with capers and olives (first class sodium) and a small container of Caprese salad I scarfed these at the gate, bringing tuna and onions on a flight is an aroma offense I wasn’t willing to commit.
Once on board, I chugged a bottle of water, put on noise cancelling headphones, and a cashmere scarf, and airplane socks. I know my next move flies in the face of typical nutrition advice (oh well) but when the drink cart comes around I get a scotch and a glass of water. I take magnesium and Zyflamend nighttime (anti inflammatory with valerian root), use a disposable toothbrush and go to sleep.
I have a strict no airplane food rule (just like Anthony Bordain) so no dinner or carb-inental breakfast they offered. I’ll have more water and coffee before landing.
Return flight 10:40am
The way back our flight was during the day, which can be tricky. It’s easier to avoid eating when you’re asleep. We always try to have a hearty meal before take off. Luckily, we found omelets with ham and green smoothies. Once on the plane I had water whenever it was offered, Wakaya turmeric tea and New Primal jerky halfway through the flight. My husband had a Yes Bar and jerky.
We both felt energized having kept our eating lighter. Once home, we went for a bike ride and early dinner to acclimate.
What’s your airplane eating routine? Any road rules to share?