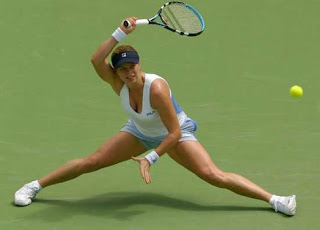 I didn’t get to see Kim Clijsters win the Open Saturday night because I was in a tent at the Bronx Zoo (more on that later). I did watch her entire match against Venus Friday afternoon. I have been a Clijsters fan for a long time. She’s exciting to watch with her splits and her grit. It’s another subject entirely but I didn’t jump on the Clijsters as super mom bandwagon. I’m thrilled she has a baby but don’t think it’s that amazing that she has a child and works. Many women do. I digress, back to Friday’s match. I sat in the living room and watched the 3-set match. I routed for Clijsters even as my 8 year old insisted “Venus is the only American left, how can you not route for her? And the truth is I love Venus and would’ve cheered for her if she wasn’t playing Clijsters.

As I watched the roller coaster of a match I did what we all do and perhaps don’t admit. I “sized” the players up. First there was Venus in her slinky black tennis dress, leggy and lean. She’s come a long way from the awkward teen with braces years ago. And then there was Kim. I don’t know Kim but you get the sense from her slightly messy hair and sporty outfit that she probably doesn’t over think her appearance. I think that’s part of her appeal. She’s relatable. As Kim stood at the baseline preparing to serve, I saw something else. I saw some jiggle in the middle. To us regular folk, that’s not a big deal. After all, we’re not all cut out to be rail thin or have abs of steel. But what do we think of a professional athlete with a little extra? During the Open, the Wall Street Journal had a piece about male tennis players being too skinny, so maybe I’m not the only one watching more than the match. 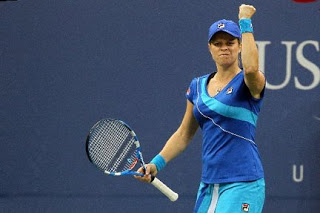 A while back I wrote about golfer Phil Mickelson and his penchant for burgers . In my brief research on Clijsters, I didn’t hear about burgers. Instead, I was happy to learn she and her husband make their own baby food. She told CNN that when she arrives in a new city she scopes out an organic food store for this purpose. I’m not sure what Kim eats but one would hope she’s getting some things for herself once in the store other than carrots to puree for her daughter. The WTA has Clijsters listed as 5 foot 9 and 150 pounds. If this is accurate Clijsters is an appropriate weight for her height. I haven’t looked into it but highly doubt players are actually weighed or measured to arrive at these numbers.

Some of you reading this, I’m sure, will point out that Clijsters did just win her second consecutive US Open title. Doesn’t that prove she’s in excellent shape? To a certain extent it does, no regular person will ever accomplish this and she beat some of the best players on her way to the title. Clijsters though, even genetically, is not a regular person. She’s the daughter of a professional soccer player father and a gymnast mother. Athleticism is in her blood. Some of what we see is talent she was born with. A few extra pounds may affect the rest of us more as we exercise or compete. After all, no matter what the training regimen, I will never slide into a complete split reaching for a groundstroke.

So if a little extra doesn’t hinder Kim’s performance does it matter? I think it might for a couple of reasons. First, with the type of game she plays, being a little leaner may decrease Clijsters injury risk. Second, if it is a reflection of her diet (and I’m not saying it is) improving in this area could perhaps help her maintain this level of tennis and even improve her speed and fitness.  In the meantime, I’m going to go work on that split.
This is a subject I’d love your input on. Does it matter if a professional athlete has a little bit of a gut? Do you think it’s mean spirited to point out? Would it be the same way if this was a male tennis player? Do you examine the physique of athletes when you watch sports? And finally, do you feel extra weight affects your athletic performance?