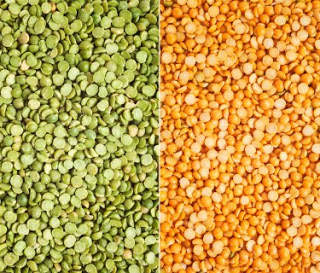 We’re in Vermont for the holidays. Yesterday it was 1 degree out when we woke up. As tempting as it was to bundle the kids and send them to their ski groups, we make the humane decision and kept them at home. The four of us prepared for a lazy day at home. What does one do with a day in the house? If you’re 5 and 7 you play indoor soccer, indoor hockey, the wii and do a lizard puzzle. If you’re a housebound nutritionist you make a feeble attempt at an indoor workout, catch up on some emails and then start to get stir crazy. I was getting grumpy until I found some split peas in the pantry. I decided it was a good day for split pea soup. This wasn’t the first time I would be eating split pea soup; however, perhaps because I had nothing to do but cook and think I found myself, for the first time, contemplating split peas.

I know some people may tackle bigger, broader topics such as the meaning of life or the definition of happiness but in my food-centric mind I was wondering only one thing…how do split peas split? As you gather with friends for New Years, maybe you’ll be searching for a conversation starter. Do me a favor, ask those around you just how split peas split. I would be willing to bet most people don’t know. Is there a splitter somewhere? Someone who’s profession is to split the peas? Or maybe a machine was engineered for this purpose. Are you curious, dying to know? I was and went in search of the answer. Before I divulge, I will tell you some other split pea particulars I unearthed:

• Split peas have a long history and have been used in many cuisines as early as 400-500 BC in Athens where they were sold by street vendors.
• A cup of cooked split peas has around 200 calories, 16 grams of protein and 16 grams of fiber
• Split peas are members of the legume family counting lentils and black beans as relatives
• Split peas are high in trace mineral called molybdenum. Molybdenum helps you metabolizes sulfites. So…if you get headaches from red wine or dried fruit, split peas may be an antidote.
• Split peas are high in purines and should be skipped by those with gout or prone to kidney stones.
• Unlike other beany family members, split peas require no soaking before cooking
• Like other beany family members, you should pick through your split peas and toss any stones or dirt before cooking them.
• Cook 1 cup of split peas in 3 cups water for 30 minutes or until soft.
I realized I was low on soup ingredients (no ham, no stock) and decided to throw it out to the twittersphere and ask for split pea soup suggestions. The twittersphere answered with recipes and ideas. One person suggested a prosciutto bone, another bacon salt. After almost a week of heavy mountain food, I decided this was going to be a vegetarian creation. I settled on a recipe from a blog called Adventures of a Food Slut. Though the recipe was easy and required few ingredients, it turned out I still would need a trip to the store for thyme and an onion.
Truth be told, the going to the market on a one degree day didn’t happen (though husband is on an ingredient run as I type). Since I can’t share with you the details of my “slutty soup”, I can at least inform you for your New Years’ discussions. The answer is there isn’t a pea splitter, neither a human nor a mechanical one. One of my favorite websites, Worlds Healthiest Foods informed me once dried and their skins removed peas split naturally, simple as that.
What other food mysteries are you curious about? What are your split pea secrets? Let me know, I am making my soup today.
P.S. I did make the soup, as promised. We headed out for dinner that night but I’ve enjoyed it for 2 lunches. It’s nice to have something healthy and home cooked after skiing.  I took a photograph but split pea soup isn’t that beautiful, you’ll have to trust me.