Kelly Bensimon Can Make You Hot 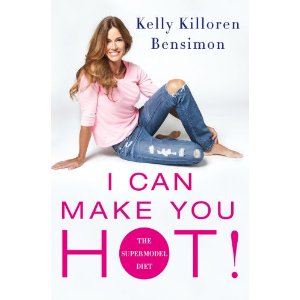 For those of you with better taste in TV shows than I do, Kelly Bensimon was one of Bravo’s Real Housewives of NYC. She’s probably best known for an episode, taped on a girls’ trip to the Caribbean, where she really appeared to have lost her marbles. I’m not talking tipsy or ditzy but full-blown seemingly mentally ill behavior for us all to see. That was a couple of years ago and now model Kelly, the original tanorexic, 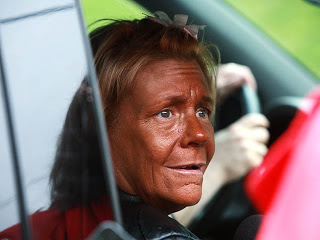 or as one commenter on a message board said, who looks like she rolled around in a bag of Cheetos, has a diet book.
What’s that? Is everyone’s a nutrition expert?
Not to worry, on page 1- yes I did waste $11.00 on the kindle book, Kelly clears it up. “I’m not a doctor or an expert of any kind. I’m just a mom who was a teenage competitive swimmer and a model who has lost 50 pounds twice.”
Let’s dissect. She’s not an expert of any kind  she’s a mom (there are many mothers, how is that relevant?) who was a teenage competitive swimmer (bragging trying to justify authorship with athleticism) and a model (because they’re known for stellar eating habits) who has lost 50 pounds twice (um pregnancy doesn’t count). It gets worse she adds Playboy to her resume and plays the pity card because she was never “one of those tiny, blonde girls who guys named their hamsters after” OK so I didn’t waste my $11, page one and Kelly the Kookoo Krispy is in full bloom…hamsters?
Exercise Advice
Kelly  defends her RHONY running in the streets of NYC habit. See, on the sidewalk “you can get snacked by a shopping bag, a stroller, an even an oversized purse. Sidewalks are really obstacle courses. Beware!” So we’ll avoid the oh-so-dangerous Fairway bag and get hit by a Fresh Direct truck, that will be HOT. And there’s a suggested playlist, for when you’re running in traffic, it includes “Skinny Love” by Bon Iver and “Beautiful People” by Chris Brown. And in case you think running down Broadway listening to “Beautiful People” will make you look tranny hot like Kelly, she cautions “unfortunately I can’t give you my legs but I can help you be the best you can be.” Kumbaya. 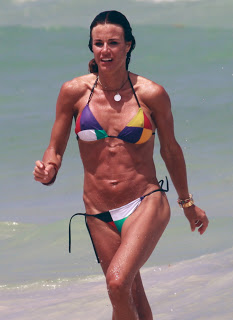 What doesn’t work
Kelly turns reveals her tricks by first  clearing up what doesn’t work. There’s a long list but for a taste:
If anyone reading this book needs this list, they need psychotherapy not a lunatic model taking you down diet memory road.
What works
Want to know what really works? Drumroll please. OK, Kelly discovered that “really eating is the key.” After that insight, Kelly transitions into a supermarket section and gets a little bossy. First “dress to look good when you hit the supermarket, if you look good you’ll feel good and buy food that’s food for you. No sweats.” I checked PubMed and couldn’t find studies showing that people who look good bought food that’s good for you. And do yoga pants count as sweats? If so, I clearly don’t look good when I shop. Next, Kelly says it’s not hot to snack while you shop.  So much for the motivational speak, I am not hot either. As someone who’s genetically predisposed to snack while shopping, my mother said the doorman always knew her groceries because the baguette had the end torn off, I resent this.  Plus, Kelly insulted my mother too. Grrrrrr.
Here’s a sampling of the staples on Kelly’s suggested shopping list:
So this book is a total waste of time but like reality TV it’s the variety of time wasting that’s so unintelligent, self-serving and “off” it kind of sucks you in. I’m sure Kelly is proud of herself for writing a book (her 2nd actually) but Kelly I have advice for you, reading a book- that’s smokin’ hot. And because I couldn’t resist
Do you think anyone is justified in writing a diet book? Have you seen Kelly on RHONY? Do you like olives?