Kim Cattrall and the Super Bowl 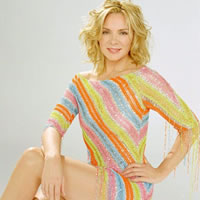 Today’s post was intended to be Super Bowl-centric. After all, the big game is Sunday and I want you all nutritionally armed. The truth though, for me, is without the Giants or the Saints the game isn’t a major event and there’s something I’d rather talk about. If you’re disappointed please check out two Super Bowl articles I wrote that will provide you with potential food fumbles and also MVP choices. This post appeared on the Daily Green  and this one on Blisstree.
So do you want to know what trumped the Super Bowl? Kim Cattrall did. Yesterday I was reading Land Animal. She alluded to an interview Kim had done with the Daily Mail in which she says she has been on a diet most of her life. Land Animal asked if this made us sad and said “society’s refusal to let women age is tragic. We are supposed to diet and work out until we cry.”
I read the article in the Daily Mail and had a different reaction. Kim talked about having to watch what she eats because she has a large appetite. She talked about growing up with a healthy relationship with food and mentioned that it’s harder to maintain her weight as she ages.  I applaud Kim for her honesty. This is a nice break from “I eat a ton” and all the nice-try-we-know-you’re-full-of-it comments we get from celebrities when it comes to weight. Is it so bad to admit that you work at it?
Maybe it was the word diet that put Land Animal and others off. If Kim had said, “I watch what I eat” would it have been the same? And would the reaction have been the same if Kim (hard to imagine) were somehow male? I read, in the seriously scholarly OK magazine (I was getting a manicure), the beefy Bachelor Brad say, “I eat very clean and watch everything including sodium.” This, along with his 2-hour workouts, sounds far more obsessive than Kim’s comments.
I thought about myself and my eating. I watch what I eat and make an effort to eat lots of produce, work out most days of the week and from time to time keep a food journal, is this a “diet”? If it is I’m ok with it. Maybe my children who I encourage to try new foods and eat 2 fruits and vegetables are on their own form of a diet too. Ultimately, I think there’s a big difference between having a system that works for you and being overly restrictive, fasting or testing out the Twinkie Diet.  Now that would be sad.
What do you think of Kim Cattrall’s comments? Sad or honest or both? And what will you be eating on Sunday? I hope it’s not a food fumble.

** congratulations to Aidan  who won our Energy Kitchen giveaway. For today Food Should Taste Good, our #1 Superbowl snack, is giving away a goody bag with different flavors chips, chip clips, coupons and a fun FSTG tote bag. Comment for a chance to win.