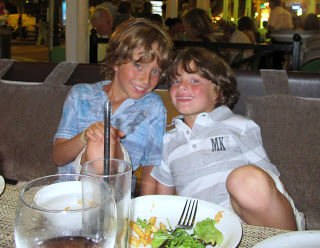 (We were in France for vacation; this is a first of a few travel-related posts)

Earlier this summer my friend Courtney was visiting from San Francisco. Courtney and I met 8 and half years ago, a month after we each had our first child. We were seated next to each other at one of those new mothers’ luncheons. Courtney made sarcastic comments about the “lecture” and rolled her eyes in my direction, we were instantly friends. This was before Courtney left NYC for SF and before Courtney had 2 subsequent beautiful babes. In the years since, Courtney has been my traveling idol. We had our second children around the same time. Before I had mastered getting a 2 year old and an infant in a taxi, Courtney was boarding the red eye with 3 kids. We all hope parenthood will not slow us down but for Courtney it didn’t. Emails came from Switzerland skiing, on a train in the South of France and it seemed it was possible, at least for her.

As we sat on my couch with a glass of wine, we were just starting to plan our trip to France where Courtney had just been. We talking about traveling with young children and Courtney remarked “there was not a kids menu on this trip, the kids did eat a LOT of Caesar salad, they really ate what we ate.” This instantly struck a chord. My children are good eaters. They eat all fruits and vegetables, salad, sushi and Thai food. And they also have cookies and ice cream and all the normal kids’ treats. Last summer, in the UK, they did well food-wise but most of what they were eating was fairly familiar and I wasn’t as fixated…

We left for France and I was determined for my children to eat anything and everything, most likely too determined. Our first few days in Paris were fantastic on all fronts, including eating. The boys were in bread heaven devouring croissants and baguettes, their new favorite word boulangerie. Our third day was my birthday. My husband nicely offered to take the boys for a couple of hours while I did some shopping. We planned to meet at the café at Colette for lunch. While I like shopping and loved browsing, I lack endurance and arrived at lunch a little early. I decided to order and have things ready when the boys arrived. I ordered an egg dish, Caesar Salad, chicken with lentils and a cheeseburger for good measure.

The food was on the table as the boys came in. “What are we eating?” they asked. I placed the cheeseburger in front of my younger son, the carnivore and the salad for my older son, the veggie lover. “I don’t like this burger” Weston whispered, aware it was Moms birthday and also the “eat anything” pressure. My husband examined the burger and said “there’s a lot going on there chutney and pickles and some ham, I’ll take some things off.” I held ridiculously firm and said “Wes, we’re not in NY foods aren’t always the same.” Truth be told, in NY I wouldn’t have ordered this burger. The dissent intensified as Myles said “this salad is too cheesy and the cheese is strong.” I started to unravel as though my vision of their eating was shattered, abnormal I know. But I didn’t stop, I pouted, I bribed until finally I asked the boys if they wanted to try my poulet and lentils. Really trying to please, they tasted the chicken and lentils and ended up sharing the dish.

We left Colette, I felt terrible. My husband pulled me aside and said “you have to lighten up; they’re trying but aren’t going to change their habits overnight.” Wow, if anyone should know this it’s me! As we walked along Rue St Honore, I knew he was right. I had to let go of the way I envisioned the boys eating as it was backfiring and causing tension. We ended up at Brasserie Lipp for dinner that night. The boys had melon and jambon, poulet with haricot vert. They tasted ratatouille that came with my salmon and picked frites off of Marc’s plate. It was a delicious dinner that we all enjoyed.

For the remainder of the trip I didn’t abandon all hopes of the boys trying new foods. I generally ordered a few things for the table and let them decide what they were interested in. I also learned that sometimes sampling involves trying pistachio or caramel ice cream or some of the exotic jams delivered with breakfast. There wasn’t even the temptation of a menu pour les enfants, which was nice. In France, if they exist we didn’t see them. So while they may not love chutney or stinky cheese there wasn’t a buttered noodle or nugget in sight.
When you travel do you seek out the familiar or branch out? Have you ever noticed, despite good intentions, placing food pressure on your children? And what’s your favorite French Food?