My Idea of Stadium Food 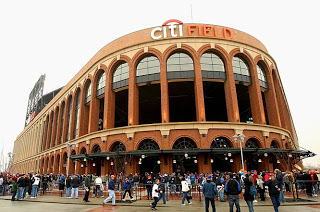 Last weekend, a friend emailed asking if my son would like to go to the Mets game with her son and husband on Tuesday (notice she wasn’t going).  There was no need to consult my son, I replied and accepted on his behalf. My husband said “we should get tickets and go to the game too, it’ll be fun.” When I woke up Monday morning, I spotted something in the printer. There were Mets e-tickets husband had printed, I counted and there were 3.  I had optimistically assumed  the “we”  had meant husband and 7 year old, it never crossed my mind I was part of this Citi Field plan. I could’ve weaseled out, could’ve invited a friend for my son. I didn’t go this route because my boys are leaving for 7 weeks today. I’m sure, the few of you who read this blog, will hear more than you want to about this but for now let’s just say I was apprehensive enough  about their departure to miss a new episode of Chopped and eat stadium food. Even I can be a good sport.
As a nutritionist, stadiums in some ways are enemy territory. I always feel as though I have my “fists up” and need to be ultra-vigilant with the various dietary obstacles I’m sure to encounter.  There are people who feel soft pretzels, beer and hot dogs  are part of the baseball experience. I am not one of those people.   Knowing this, I did some pre-eating before we left the house. I had ½ an avocado and some leftover roasted asparagus acknowledging this was likely the only green I would see (I was wrong the Oakland A’s actually have green on their uniforms).
After dropping my son off at his friend’s apartment we made our way to the game.  We arrived early and decided to walk around for a bit. There’s a great area for kids  at Citi field with batting cages and dunking booths. I laughed that the Shake Shack burger line was easily 75 people deep,  the line for the batting cages? Three people.  While we waiting for my son’s turn, I made a comment to my husband about healthy food. The woman in front of us  eavesdropped overheard, she turned and said “I think the healthiest thing are the hot dogs, if you look at the calories they’re pretty good.” I passed on this “teachable moment” but people are really confused about nutrition when hot dogs are described as “healthy”. 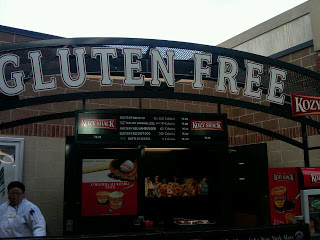 There was a gluten free booth at the stadium featuring “gluten free hot dogs”, “gluten free hamburgers” and “gluten free sausage”.  I wasn’t intrigued by the gluten free junk and settled on a sushi roll. I picked a cooked shrimp roll as  Anisakis isn’t the way I’d like to drop a couple of pounds.  My husband had a pulled pork sandwich from Blue Smoke.  Clearly he and the hot dog fan have similar notions of what “healthy” means but he returned from the bar with Absolut Pear “on the rocks”  for me so I will not be too critical.  I’m sure the pretzel people would think eating sushi and drinking vodka at a ball game is sacrilegious  but I was thrilled. I’d even go again (when the kids get home in 7 weeks).
When was the last time you were at a stadium? Did you pre-eat beforehand? What did you eat at the stadium? Any healthy stadium finds?