While I am in book editing hell hard at work editing, Carolyn offered to post on one of my editing crutches and new favorite drinks.
Lauren and I both have our morning coffee rituals — though hers currently includes coconut oil and mine a cute Aussie barista, we can caffeinate with the best of them. As the day progresses our office transitions into a tea zone. Green and white teas are our staples but we also pu-ehr and matcha (I attempted to get into matcha… still acquiring that taste).
But there’s officially a new guy in town or in our glasses. Guayusa (“gwhy-you-sa”) has become our midafternoon revitalizer. The leaves contain the caffeine content of coffee, double the antioxidants of green tea but no tannins or bitterness. Most importantly, guayusa contains a miraculous little compound called theobromine which is also found in dark chocolate.  When caffeine and theobromine unite, the result is a balancing effect which means you get a stimulant sans the shaky jitters or crash. 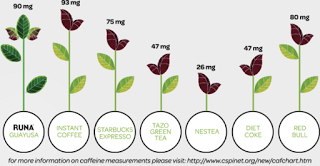 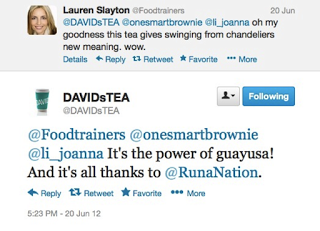 Great success. We had spotted RUNA’s pretty iced tea bottles on one of our Foodtrainers Whole Foods field trips. That was before we knew that guayusa has traditionally been consumed by hunters for acute focus or that the “Super Leaf” also contains chlorogenic acid, a compound that can aid weight loss. If you’re not convinced yet, it’s said guayusa protects you against snakebites and gives you courage and power… which are basically the essentials mid-day in NYC, right?
We are loving RUNA’s unsweetened Lime and Guava iced teas for spring and summer – have you tried guayusa? If you can’t nap (our ideal afternoon plan), what’s your upper of choice? When you try this fun drink, please tweet us or come back and let us know if their was any chandelier swinging and I’ll try to snap a photo of my barista.