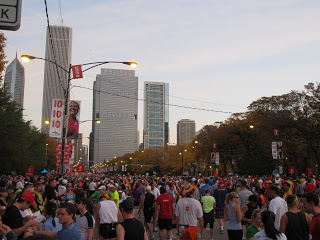 I woke up at 5am on Sunday. Waking up implies sleeping and while I did get a decent 5 hours worth, I didn’t need an alarm to get me up. Ten years ago when I was running the Bermuda marathon, I happened to ride down in the hotel elevator with the race director. He asked how I was feeling and I said “I would be a lot better if I slept.” He told me what I now know saying “nobody sleeps the night before a marathon.” At 5am I jumped into the shower and my husband went to the hotel lobby for coffee. We researched the day before and knew Starbucks opened at 530AM. When Marc got downstairs, there was a line 100-people long for Starbucks which hadn’t opened. He resourcefully went across the street and returned to the room with our coffee. In the event that Starbucks didn’t open on time, we had another coffee on ice in the room overnight. Call that what you will, there was no way I was running a marathon without coffee and enough time for that coffee to “digest.”

I had a hand written schedule for the morning as I wanted to be sure I didn’t forget anything and that I followed my timeline. I had the coffee with a banana and a container of peanut butter puffins cereal (dry) that I had transported from New York. My stomach was doing flips but I managed to eat enough. I am not someone who can tolerate a huge volume of food before a race. After eating I got dressed, packed up my clip on “Gu” pouch (though not with Gu), body glided any area with chafing potential and in my back pocket placed 2 rewards. One was the “mile 27 beer ticket” and the other was my secret marathon weapon, more on that later.

I grabbed another banana and a bottle of water, said goodbye to Marc and headed to the lobby. I have to admit that while waiting for the elevator, I felt a little emotional, ok truth be told I cried a little. It’s just a marathon but I had trained hard, felt support from so many clients and friends (and of course Marc) and felt lucky and proud. In the lobby, I met up with my sister in law Jenny, my friends Diane and Eric and a couple of their running friends. We all walked out in the semi-darkness to the starting line. After waiting on the Porto potty line and joined our 38,000 “friends” in the corrals. 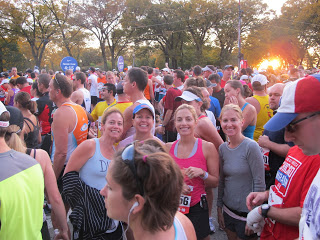 We were entertained by the sounds of Bruce Springsteen (what’s a marathon without hearing Born to Run) and the Stones and though we didn’t hear a horn or any other indicator, at some point people started moving. It took about 10 minutes for us to cross the starting line but we did, my Garmin watch found a satellite and we were off (see below aren’t we fast?).

There were a lot of turns for the first few miles of the race which served as a good distraction. I also generally run alone so the conversation about the race and sights propelled me forward. At every mile marker I said to myself “it’s mile 3 Jen and I’m still enjoying myself”. At the water station around mile 6 I had my first of 3 Clif Shots. All 3 of my shots were caffeinated (mocha and berry) which I swear by during longer runs or races. 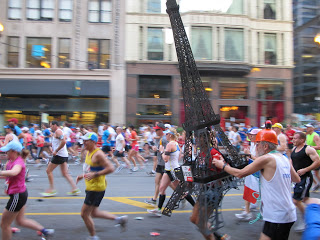 At around mile 10, a searing pain my foot told me it was time for some Tylenol and at mile 12 the second “shot”. Somewhere along this point I realized the alert system had changed from green, indicating no danger, to yellow. This would change to red before long. The temperature displayed outside banks was climbing well into the 70s. After hitting every water stop, I had to hit the bathroom around mile 15. Normally, I would’ve done everything in my power to avoid wasting precious time going to the bathroom but with enjoying myself came a decision that I wasn’t going to make the day about my time goal. This is a decision I regret a bit now but it seemed right at the time.

At the 17 mile marker Marc was waiting, waving a Blackhawks hockey stick so that I could find him in the crowd. He was standing with supplies ranging from chap stick to band-aids, depending on what I needed. I had my 3rd shot, some water and one Tylenol and was on my way. At this point, I put on my music. My plan was to have Excedrin, my secret weapon, at mile 20. The only problem was at mile 20 when I reached for those 2 green capsules in my back pocket, all I felt was powder. I saw Marc again on the sidelines and barked “Excedrin, I need Excedrin.” “Where is there Excedrin?” he asked, confused. I ran off realizing I hadn’t packed the Excedrin in his supply pile and also realized that the powder in my back pocket was my Excedrin, it had melted. As we approached the next water stop I stooped to a new low. I pushed my hand into that back zipper pocket “fun-dip” style and pushed some bitter green Excedrin into my mouth, I chased it with water or Gatorade. I repeated this at the last couple of water stops.

For whatever reason, maybe the Excedrin or a conservative early race, I was feeling strong. I was enjoying the Beyonce’, Lady Gaga and Michael Franti on my iPod and was definitely starting to “count my chickens”. Suddenly at mile 24 or 24.5 I felt very tired. I thought about J and J and told myself I wasn’t allowed to walk until the water stop but I wasn’t sure I was enjoying myself anymore. Then, out of nowhere, I saw that Blackhawks hockey stick. It was Marc, I wasn’t supposed to see him again until the finish line but he was there. I told him I couldn’t run anymore and he told me to follow him. I kept thinking he was going to look back and I would be on the ground. He had a backpack on and the mini hockey stick peeking out the top. Despite my fatigue, I had to smile. Soon there was a sign that said 800 meters to go. I have no sense of distance but I knew I was close. Marc wasn’t allowed to run any further but I made a right turn and went up the largest hill of the race to the finish line. I receive my medal and the tin foil cape for fun (85 is a bit too warm for insulation). I spotted the sign that said “mile 27 beer party” and despite the sweaty coupon in my pocket I decided that was the last thing I wanted. It turns out I didn’t really need my secret weapons after all. 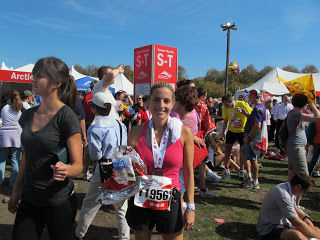 And, not for the faint of heart as I promised yesterday the world’s biggest blood blister, ick. 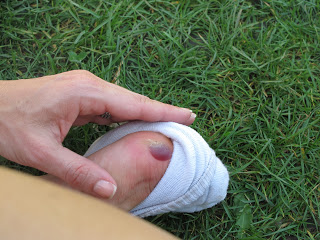