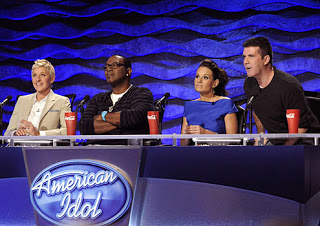 I know this will come as a complete shock to those of you who think I’m scholarly and mature (does anyone think that?) but I really like American Idol. I have downloaded Lee DeWyze and Crystal Bowersox’s recordings from I tunes and look forward to watching live every Tuesday night. I’m a music fan, I practically chose my college because of this, fell in love with my husband at Jazz Fest- you get the picture. Yet what I really enjoy on Idol is the judging. At times the performances are fantastic, many are painful and the judges have to comment on them afterward. Oftentimes the judges try to make nice. Paula Abdul was known for remarking on a contestant’s outfit when there was nothing else positive to share. Most of the judges are honest. Nobody is more honest that Simon Cowell.

Simon Cowell makes no attempt to cushion the blow when contestants falter. If something is terrible he is not going to say “it wasn’t your best.” He will likely say it was appalling or horrendous or a train wreck (and in that case it probably was). You can see the singers waiting for Simon’s comment unable to gauge things until he speaks. After all, praise from him is as genuine as his critique. Strangely enough, there are some similarities between what I do, at Foodtrainers, and the judging on idol. Clients keep food journals and come to sessions to discuss their eating and exercise regime. There are times when clients may say “the week was OK” and I look at their journals and think otherwise. I am confronted with a choice to politely point out how things could’ve been better or to bluntly say “this wasn’t a great week.” I’ll admit, with clients and nutrition I often feel it’s most productive to take an optimistic, supportive stance. There is so much, when it comes to weight loss, that is filled with guilt and negativity that I don’t think I need to add to this. So does that make me a Paula?

What’s funny is that some of my client meetings are conducted via phone. I’ve noticed that when I am not face to face with a client, I can be more honest. It is hard to say something insulting, even if true, while looking someone in the eye. I cannot imagine what it’s like in front of millions of people, with a live audience and probably the contestant’s entire family nearby. I think it takes a ton of courage and confidence. Simon is leaving American Idol; next week will be his final week of judging. Perhaps the show will fill his seat with someone else who is brutally honest. However, they will have a tough time finding someone who is honest without malice, honest and always aims to be constructive though maybe stinging a little at first.
Do you have a “Simon” in your life whether a friend or family member? Do you think honesty is the best policy when giving an opinion? Do you like American Idol too?