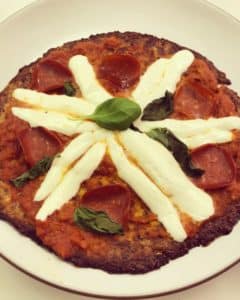 We receive a lot of emails asking if we want to sample, and then promote, various products. Half the time, it’s unclear they know we’re nutritionists, the items are so sketchy. Other times, we have follow up questions. Are there sweeteners? Is it gluten free? Can we see the ingredients? So, when Califlourfoods reached out, we had our healthy guard up. “Most cauliflower crusts have brown rice flour or other grains.”  We were told Califour is grain free, has very few ingredients and even makes a vegan version. I was excited. 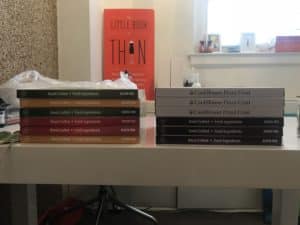 As luck would have it, our shipment (including various crust flavors and their new collagen, cauli wrap) arrived right after I left the office one day. Grace sent me a photo. I couldn’t wait until I went to the office the next day. I asked her to messenger a few to my apartment. My package arrived, I put them in the freezer and left for an appointment, with my younger son.

A few minutes later, my nanny called, “The messenger came back and demanded the pizza crusts.” I was so confused. “But they were mine” I responded. “He gave me an envelope and had me pack up everything and give it back to him.” The disproportionate alarm flaring up in me was staggering. I called Grace, who was now on the train home. “I mean, was he hungry? I knew they were mine, how could he take them?” I really don’t think taking jewelry form me would be any more distressing. She shared my confusion. Fired up, she called to try to sort this out. Grace texted me, “the person next to me just moved, I’m that person yelling into their phone.”

When I arrived home, an envelope for a design firm downtown sat on the counter. I flipped it over and saw “Foodtrainers/Lauren Slayton”. The sticker from my bag had somehow attached itself to another package. After an hour, and major fears of my crusts defrosting, they were returned. I preheated the oven and got to work. I first made the Original/Italian crust. I topped it with Rao’s sauce, Applegate pepperoni (I am team pepperoni), basil and fresh mozzarella. It was worth all the stress.

And, we want to share the pizza love with you! If you wish to have a shipment sent to you from Califlour (and hopefully not stolen), click here. Use our code Foodtrainersfave to save 10%. Here is Grace’s pretty vegan pizza. 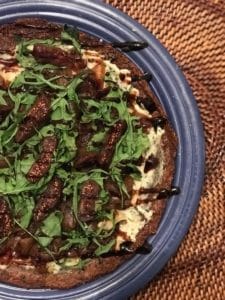