Vegetable of the Week 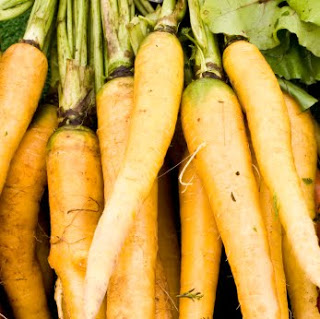 This year, for Thanksgiving, I was put in charge of sides. I made Brussels sprouts hash, I made string beans and I made something new… When I arrived at my sister’s house I left my new creation on the counter as we finished preparing other parts of the meal. “What are these” my brother in law asked as he tasted my new creation and “yum, these are good” remarked my niece Sam. The next day, my new creation received the ultimate vegetable vote when my sister wrote in an email “oh and I need the _________recipe, those were a hit.” So what was my well-received new creation? It was roasted parsnips with parsely and while I cooked it, I can’t take credit for creating it- Bon Appetit did.

Recently, we blogged about cauliflower. Whereas most people know about cauliflower, I am not sure everyone knows what a parsnip is or could identify them. Parsnips look like whitish carrots. They have a unique flavor (good unique) and get fairly sweet when cooked. In fact, parsnips been cultivated for over 2000 years and were used as a sweetener for jellies and cakes before sugar was on the scene. Parsnips are a winter vegetable and will only get better later in winter as sweetness increases with frost.

•To prepare trim both ends and peel (like a carrot)

• Use parsnips raw grated in salads, roasted or in soups

• I asked Market Melissa and she told me parsnips (per cup) have 100 cals, 6-7g fiber and are a good source C, folate and potassium.

Preheat oven to 450. Toss first 3 ingredients in a bowl and spread on a rimmed baking sheet, if using butter dot with butter. Roast 20 minutes and turn parsnips with tongs. Roast another 15 min or until browned but soft. Transfer to a plate and sprinkle with parsely.

How do you like to prepare parsnips? We would love to hear.