When it comes to weight loss, timing is everything 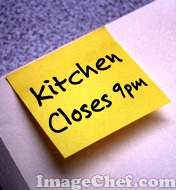 It doesn’t matter how late you eat it’s the calories in the entire day, right? Nope, sorry to say that’s another one of those weight-related rumors that can be filed in wouldn’t-that-be-nice along with “a calorie is a calorie” and “everything in moderation.” When it comes to weight loss, when you eat may be as important as what you eat and is often overlooked.
A friend sent me a link to an LA Times article “Nighttime fasting may foster weight loss”  that discusses a study recently published in the journal Cell Metabolism. Researchers at the Salk Institute placed mice on different eating regimens for 100 days. One group, fed a high-fat, high-calorie diet, could eat their food whenever they wanted. Another group was given only an 8-hour window to eat their food. The differences were staggering. The group with the unhealthy diet and no time restriction became obese and encountered a host of metabolic problems even though calories and fat were approximately the same as the “8-hour” group. Furthermore, the time-restricted high calorie group was almost as lean as the control group eating regular food after 100 days. Not only was the time-limited group better off than the grazing group, they almost fared as well as those eating a healthier diet.
If you’re starting to roll your eyes and thinking that this is one study and we’re not rodents, I hear you but this is not the first we’ve heard of this. A study from 2009 found that eating at times we should be resting leads to more weight gain than daytime eating. Just as we’ve come to accept that sleep plays a role in metabolism, we may now need to realize that our metabolic pathways and digestive system need sleep or at least rest.
In terms of putting these findings to the test, I’m not sure we need 16 hours food free. Though not impossible, we could eat breakfast at 10am and dinner at 6pm, this can be a stretch. If you’re a nighttime nosher, try the 12 hour rule; whether it’s 7pm  to 7am or 8pm to 8am, try to keep 12 hours food free. And speaking of noshing, the nutrition content of our food generally decreases the later it gets. Work with the 12 hours, you’ll sleep more soundly, reflux will be less of an issue and you may be able to get away with a little more, if you eat it at the right time.
What time do you generally eat dinner? Do you eat anything after? Do you intend to try the 12-hour rule? Maybe it’s a good strategy post Memorial Day Weekend.