Where's the Beef (Coming From)? 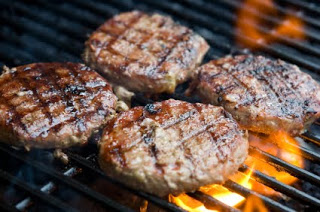 I’ve received a lot (22 to be exact) of emails about Sunday’s NYT cover story “The Burger That Shattered Her Life” https://www.nytimes.com/2009/10/04/health/04meat.html. I thought both the article and its front page placement was commendable. This time, the food politics isn’t an elitist issue or a question of optimal food, it’s a matter of food safety…or in this case a lack thereof.

In case you haven’t read it (and if you or anyone you love eats beef you really must), the article tells the story of Stephanie Smith, who was 20 years old when she was stricken with a “severe form of food-borne illness caused by E. coli.” The source of the E. coli was a hamburger. Ms. Smith will likely never walk again due to the nerve damage caused her infection. While her story is an absolute tragedy, the article goes on to trace how cows from slaughterhouses end up as the burgers we eat. The picture painted isn’t pretty and though the extreme nature of Ms. Smith’s case remains rare, it’s a wonder it’s not more common.

I read the article, on my beloved kindle, on a train to meet my husband Sunday. I got off the train, worked up in a frenzy, and quickly summarized the article. My husband, who always craves the bottom line and has grown accustom to my rants said “so what does this mean that nobody should ever eat a burger again?” And although this may have been my initial reaction, I love a good burger, once or twice a year, and I’m not willing to rule out the option. And my children, not vegans or vegetarians, are they to live out their childhoods burger free? I try to be an “everything in moderation” parent, how would this work?

While I was formulating my plan of action, I was surprised to hear from some clients who felt getting E. coli poisoning from burgers was akin to the risk of crashing in a plane. One even said “life involves risk and we can’t lock ourselves up in fear of everything.” And while I am by no means alarmist, I disagree with those who think that just because something isn’t common doesn’t mean we shouldn’t actively try to prevent it. And, to be blunt, even if I never get sick from eating hamburgers doesn’t mean it’s ok to eat feces or tushy meat (quite a scientific term I know)!

So what are we to do? Here are a few solutions:

• Grind own meat with a meat grinder or food processor. It is revolting (and should perhaps be illegal) that the meat in 1 burger can come from multiple slaughterhouses and even multiple countries and thus decrease the ability to trace outbreaks and contain them.
• No meat grinder? Have your market grind a steak for you for burgers.

• Purchase grass fed or pasture raised meat. E coli really stems from cows eating corn, not what is natural for them to eat. and being raised in small and confined spaces.

• Use meat thermometer and cook to 160 degrees which kills E. Coli

• Though organic beef is more expensive the NYT states that it would only cost companies 30 cents a burger to ensure ground beef came from whole cuts of meat. Look for “100% whole muscle means no trimmings.”

• Let the USDA know that inspections are important to you.