Will this popular, healthy drink make you drunk? 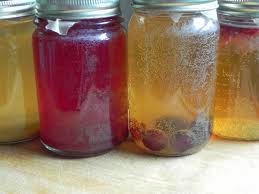 If you’re not kombucha-conscious, kombucha is a fermented tea. It tastes tart and is slightly bubbly. It was been brewed and consumed for thousands of years. Kombucha is made using something called a SCOBY (which I thought was Scooby for the longest time) but stands for symbiotic culture of bacteria and yeast.  And this is what results in a finished beverage teeming with good bacteria and good yeast yum yum. 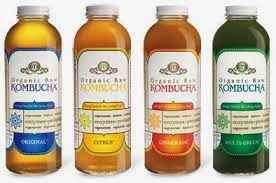 I’ll admit my bias; I love the stuff. I first enjoyed the gingerade from Synergy, love the blue green from BKkombucha, the cayenne Kombucha from Heathade and most recently fell in love with the milder kombuchas from Organic Avenue. Everyone at our office is dying to try Buchi’s sea buckthorn kombucha. Buchi- can you help us out?
I have always been aware kombucha contains trace amounts of alcohol. But while wine is generally 10 to 14 percent alcohol and spirits 40-something percent kombucha usually is .5 percent. So I was shocked when a client came in saying, “I had a few sips of kombucha and I felt something, was I drunk?” I hadn’t ever heard that, I thought about GT Dave the Synergy brand founder who drinks a gallon or two of kombucha a day “like it’s his job” oh wait, it is.
Back in 2010 there was a blip for the kombucha producers. Many kombuchas were pulled from the shelves. There was investigation into the alcohol content. The more sugar in kombucha the more alcohol it can ferment. Generally speaking the longer kombucha ferments, the more alcohol produced. Companies looked at their protocols to see how they could eliminate the alcohol without compromising the benefits. You can pasteurize and “solve” the problem but in order to have the probiotic benefits, kombucha needs to be raw/unpasteurized. Companies found ways to reformulate their brews, probably changing the SCOBY in order to control the alcohol content. Generally speaking unless in recovery/AA or pregnant continue to knock back kombucha.
Detractors will say “no real evidence” but as a superstar nutritionist (who has been at this for way longer than I have) said on a phone call last week “for many things in our field there will never be studies.” Kombucha is helpful for joint pain (contains building blocks for glucosamine) and helps with digestion (many clients report reflux improvements). Ironically, given the subject matter today, kombucha’s beneficial effect on the liver makes it an excellent hangover remedy.
So why did my client feel loopy? I dug around, spoke to some fermentation experts and there’s something I was unfamiliar with called histamine intolerance. Some people react to fermented foods with symptoms that mimic drunkenness as they lack an enzyme called DAO that breaks the histamine down. You can read more about histamine intolerance here.  There are digestive enzymes you can use if the thought of avoiding fermented foods (which help with mood and cravings not to mention immunity and more) worries you.  My only issue with kombucha is that Lindsay Lohan loves the stuff, ick. Are you a kombucha drinker? Do you make your own? Should I try? Do you have a favorite brand? Any kombucha concerns?