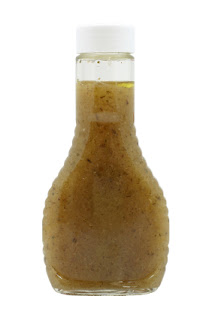 We all have a friend or family member who, like my husband, often reaches for the saltshaker even before tasting their food. Perhaps this person is chided for their overzealous shaking; perhaps not. But the truth is that even the most serious salt-lover isn’t in danger of approaching the recommended one-teaspoon-a-day of salt from that habit. Instead, have you ever considered criticizing the amount of spaghetti sauce someone uses? Maybe you should.” Here are ten sneaky salt sources lurking in your food from a post I wrote for Blisstree.
Chicken Breast
And I’m not talking about fried chicken or chicken tenders, either. Most supermarket chicken breasts are injected with a sodium solution. One serving of that can contain 400 mg of sodium (raw!), while less than 100 mg of sodium are naturally found in chicken. I first learned about this from Janet Helm’s Nutrition Unplugged post and have been disturbed ever since.
Medications
You have PMS, so you pop an NSAID (non-steroidal anti-inflammatory drug) to help relieve your cramps. But many NSAIDS (like ibuprofen) are high in sodium, which is a concern for those with high blood pressure or high “bloat.” A salt pill won’t likely help improve your moodiness once you realize that.
Baked Goods
Muffin with your salt? A Starbucks low-fat red raspberry muffin contains 500 mg of sodium, but at least that’s 400 mg less than the 900 mg in its egg white, spinach, and feta wrap. Either way, go easy on the baked goods.
Tomato Sauce
You may obsess about the carbs loaded in your bowl of pasta, but have you contemplated the sauce? Tomatoes are full of lycopene, a powerful antioxidant; tomato sauce also contains lycopene – and a lot of salt. A cup of tomato sauce (no meatballs) contains almost 1,500 mg of sodium. For less salt, make the sauce yourself using fresh tomatoes (yes, less convenient).
Deli Sandwiches
It’s no surprise that processed meats are salty. However, at delis, the meat, bread, and “extras” also contribute salt. A 6” Subway turkey breast sandwich has 910 mg of sodium. American cheese adds 200 mg and pickles another 125 mg, for a grand (or not so grand) total of 1,235 mg of sodium. How’s Jared’s blood pressure doing?
Canned Beans
You’ve probably considered the serious salt in canned soups, but what about your beans? Those that come from a can will run you more than 700 mg of sodium per cup (or 1/3 of your daily allowance). If you eat beans at home, give them a rinse in a colander or buy low-sodium beans. Better yet: Soak and cook your own.
Raisin Bran Cereal
You know that fiber is a good-for-you whole grain, and we all need more of it in our diets. Problem is, salt and sugar are often added to processed whole grains to spice them up. One culprit is raisin bran cereal, with 342 mg sodium per cup (plus a whole lot of sugar).
Bottled Salad Dressing
Just two tablespoons of bottled Italian salad dressing contain almost 500 mg of sodium. (And two tablespoons is not a lot.) Pair that with the aforementioned beans, plus some olives or roasted peppers and now you know why you feel bloated after hitting the salad bar. Foodtrainers’ favorite dressing olive oil and lemon juice.
Cottage Cheese
When you mention “diet” foods, many people’s heads fill with images of cottage cheese, Melba toast, and Kellogg’s Special K cereal. But cottage cheese is certainly not a low-sodium diet food. Just one cup contains 900 mg of sodium, so you may want to rethink breakfast (just not with raisin bran).
Ketchup
Those cute little packets look so harmless, especially compared to the fries next to them. But just one tablespoon of this adorable condiment means 190 mg of sodium. Add the fries, and you’re well over 500 mg.
The moral of the story is to read labels and check out the sodium. You don’t want your day’s food composed of many serious sodium sources, the same can be said for your children’s food. Which of these items was the biggest surprise? Do you consider yourself salt sensitive? Any strategies, other than making yourself to cut salt?