12 Things You Must Know About Cocoa-Plus a Sweet Bonus! 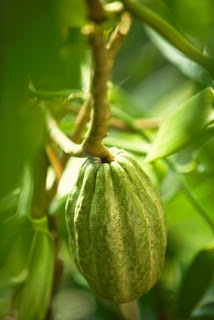 When I started blogging, I knew nothing. I’m not sure that much has changed but I can assure you I was clueless then. I poked around and found some blogs that spoke to me. I read Fooducate and Svelte Gourmand, Herbal Water and ILI and I really enjoyed a blog called Small Bites.  Every time I sent my browser to these URL’s I was giddy when a new post was up. And then something happened. A couple of months ago I noticed that there wasn’t anything new on Small Bites. I continued to check and finally there was a message up. The author, Andy Bellatti, explained he would be posting less in the coming months. He’d still be tweeting and posting here and there but not as much. I was sad. A few days later Andy tweeted some interesting facts about cocoa. I had an idea. I contacted Andy and asked if he’d do a guest post for Foodtrainers. He agreed and I’m excited to share Andy’s cocoa post with you today (and the good news is Andy is now posting regularly again):

Whether your Valentine’s Day celebrations included gifting your other half a lovely box of chocolates or protesting the infamous massacre by watching “War of the Roses” while savoring some chocolate ice cream, here are twelve facts everyone — singled or coupled, starry-eyed or jaded — should know about this world-famous delicacy:
HEALTH AND NUTRITION:
1) Cocoa (also known as cacao) contains a variety of healthful compounds known as flavonoids that have been found to have a protective effect on blood pressure and cardiovascular health.
2) There are three ways to get the most health benefits from cocoa: eating raw cacao nibs (i.e.: adding them to trail mix or oatmeal), adding unsweetened non-Dutch-treated cocoa powder to a recipe (such as a smoothie) or consuming chocolate bars that contain at least 85% cocoa.
3) “Dutch-treated” or “alkali-treated” chocolate produces a more mild-tasting chocolate, but also decreases flavonoid content by approximately 75 percent.  What a shame!
4) Certain components in dairy limit the absorption of antioxidants from cocoa.  This is why bars with higher cocoa contents (and, thereby, lower milk percentages) yield more health benefits.  Alternatively, you can also try vegan chocolate bars, like Endangered Species.
5) Two tablespoons of cocoa powder provide 4 grams of fiber.  A perfect way to add extra nutrition and flavor to a banana and almond butter smoothie!
6) Stearic acid — the saturated fat predominant in chocolate — is unique in that a good chunk of it is converted by the body into a heart-healthy monounsaturated fat known as oleic acid… the same one found in large quantities in olive oil!
7) The lower the cocoa content of a chocolate bar, the higher its sugar content.
8) Cocoa releases many neurotransmitters, including phenylethylamine, which has been shown to improve mood and alertness.  Best part?  No subsequent crash.
9) Cocoa is an excellent source of catechins — compounds also found in green tea and red wine that help reduce atherosclerosis risk.
ENVIRONMENTAL EFFECTS:
10) Conventional cocoa crops are often sprayed with methyl bromide, a class 1 ozone-depleting substance.
11) As with coffee, shade-grown cocoa beans are healthier for the planet.  Since they grow under existing trees, they do not disturb floral and faunal biodiversity.
SOCIAL JUSTICE:
12) The majority of chocolate bars are made from cocoa beans grown in West Africa.  Due to the paltry amount of money they receive from many large-scale chocolate companies, these farms often turn to slavery-like forced and/or child labor to ensure profits.  This is why it’s crucial to look for “fair-trade certified” chocolate bars.  This certification ensures that cocoa farmers are receiving their fair monetary share, and that farm employees work in humane conditions.
BONUS: Mexican-Inspired Super-Easy Chocolate Truffles
Now that you know all about cocoa’s wonderful health benefits, why not spend just ten minutes in the kitchen making a delectable dessert chock-full of flavonoids, antioxidants, vitamins, and minerals?  These raw vegan truffles with a kick will leave you saying “Crunch bar WHO?”
YIELDS: 12 truffles
INGREDIENTS:
1/2 cup raw walnuts OR raw almonds OR raw hazelnuts
1/8 teaspoon salt
1.5 teaspoons vanilla extract or powder (the powder yields drier truffles)
1/2 cup chopped pitted dates or raisins (I highly recommend dates; if your food processor is powerful, you don’t need to chop them)
5 tablespoons unsweetened cocoa powder or raw cacao powder
1/2 teaspoon cinnamon
A pinch of red pepper flakes
INSTRUCTIONS:
1) Grind nuts, salt, and vanilla in food processor.
2) Add dates/raisins and process again, until mixture resembles raw dough.
3) Add cocoa powder and cinnamon; process again.
4) Scoop out mixture into large bowl.  Add red pepper flakes and mix into “dough” by hand.
5) Form dough into bite-size round “truffles”.
6) Refrigerate or freeze for at least 2 hours.
7) Enjoy!
NUTRITION INFORMATION (for 3 “bites”)
205 calories
5 grams fiber
5 grams protein
Andy Bellatti is a Seattle-based whole-foods-focused nutritionist. He also provides customized nutrition-based services and regularly writes and lectures on various aspects of wellness, health, and nutrition. His work has been featured in Oxygen, Today’s Dietitian, AOL Health, and MSNBC.com. Andy has an MS in clinical nutrition from New York University. Follow Andy on Twitter: @AndyBellatti.
So, which of these cocoa facts were a surprise to you? Do you know what plant is in the picture above?Do you think about the environmental impact of the foods you eat? What were the first blogs you started reading?