Adzukis Have Arrived and Giveaway 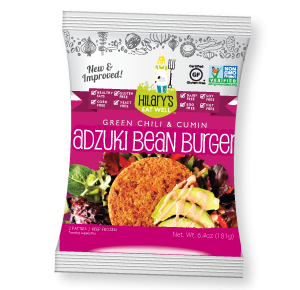 You know when you think about someone and then run into them shortly after? Or how about when you don’t know about something, hear about it for the first time and then it’s everywhere you look? I always wonder, was it there all along?  OK I’ll cut to the chase. I like all sorts of beans but had never had adzuki beans or maybe I just didn’t these little red beans by name. I was served adzukis in August along side salmon and they were nutty and delicious. Next thing I know, I’m in Citarella Market a lovely fish market in NYC but hardly bastion of cutting edge foods, and on the shelf are organic adzuki beans.I snagged them and until yesterday admittedly shelved them. Shortly after this adzuki encounter, I see the Hilary’s (veggie burgers extraordinaire) people at Expo East and see these adzuki beauties (above). So in my world, adzukis have arrived although they have been consumed in Asia for centuries, so what do I know?

About Adzukis
Adzukis started to be used here with the macrobiotic movement. In Asia they are often used in desserts though they are just as well suited to savory applications.Adzukis are lower in calories and have more protein than other beans; according to Dr Weil they are known as “the weight loss bean”. Adzukis are also easier to digest than other beans translation: less gassy. Due to their molybdenum (trace mineral) content are also known as a liver detoxifier. Adzukis are a diuretic and used to treat swelling. In Chinese medicine adzukis are used to treat kidney and bladder infections. And you may find this a stretch but in TCM the kidneys govern fear, adzukis therefore tradition says provide courage…I should probably stick to the protein content. Or, I’ll add that adzukis are very high in iron, good if you are prone to anemia or following menstruation. Phew.
Hilarys Adzuki  Bean Burgers are a great way to taste adzukis. Other ingredients include coconut oil, cumin, chilies and apple cider vinegar. Hillarys are gluten free, dairy free, corn free, nut free, egg free and soy free. They can be popped in a toaster or heated in a pan. These are my favorite veggie burgers and a freezer stable in our house.
In our Carb Riffs newsletter (coming tomorrow) we’ll also feature a sweet adzuki recipe.
I quick soaked the adzukis and then cooked them up, added Himalayan salt and coconut oil and I’ll use them for salads, tacos…maybe even a smoothie if I’m brave.
Some other adzuki ideas:
Miso Adzuki Stew from Vegetarian Times
Adzuki Brownies
Adzuki Tea

Hillarys is give coupons for free packages of burgers to 5 lucky readers. To be eligible 3 easy steps:
Comment and let us know if you’ve tried adzuki beans or Hillarys before.
Like Hillary’s on Facebook
and Tweet “@Foodtrainers has #giveaway for @hillaryseatwell burgers #glutenfree #soyfree #healthy https://foodtrainers.blogspot.com/2013/10/adzukis-have-arrived-and-giveaway.html”

Have you had adzuki beans? Sweet or savory? Are you a veggie burger person? Have you seen or tried Hilary’s before?