Appearance or accomplishments, does it have to be one or the other? 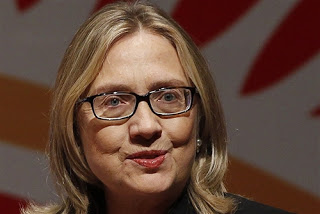 Last week one of the major news stories was that that Hillary Clinton was photographed without makeup. At first it didn’t seen to matter that she was on a trip in Bangladesh where there has been weeks of strikes and violence. The photos spread like non-waterproof mascara. Then came the backlash pointing out the frivolity in Hilary’s “look” as major news. As I read this commentary the resounding message was that in 2012 appearance trumps accomplishments and looks shouldn’t matter…but they do.
Peggy Orenstein, author of Waiting for Daisy and Cinderella Ate My Daughter posted about the Hillary hubbub.
“Every choice a woman makes about her public presentation–how she dresses, how she wears her hair, whether she wears makeup and now whether she botoxes etc –makes a STATEMENT about who she is (as opposed to that statement being made by her actions, ideas, opinions etc) that is judged, scrutinized and held up for public consumption/discussion.”
Why must it be one or the other? Just because we take note of how someone looks does that mean we’re ignoring his or her “ideals and actions”? Isn’t communication part verbal and part non-verbal? Why does it have to be one or the other?
Orenstein goes on to compare the Clinton situation to a New York Times Magazine article exploring the concept of women being “marked.” The original article discusses men able to blend a bit more. Their hair, clothing, even shoes tend to be more similar. There isn’t a typical female hairstyle or singular way to dress. And so each choice a women makes can send a message and lay the groundwork for judgment.  I tweeted to Ms Orentstein
@peggyorenstein enjoyed that piece however some of what makes women “marked” also makes being female interesting and full of choices.
Sometimes women play both sides of the fence. Around the same time Hillary decided to forego foundation in other world news Perez Hilton tweeted @BethenyFrankel says “I’m not too thin”. Say what you will about my curiosity but I clicked through and read “There are stories are everywhere that I’m too thin. When will the media see women for their accomplishments instead of their weight and appearance?” Is this question less valid coming from someone whose accomplishments were primarily building a company called Skinnygirl? Can you talk about skinniness and then downplay appearance?
I happen to work in an aesthetics-oriented business. My clients are women in all different professional spheres. Some will mention, “I’m up for a promotion and want to feel good” I see countless examples of the intersection between appearance and accomplishments. Hillary was asked about the photos by CNN and said
“I feel so relieved to be at the stage I’m at in my life right now. Because you know if I want to wear my glasses I’m wearing my glasses. If I want to wear my hair back I’m pulling my hair back. You know at some point it’s just not something that deserves a lot of time and attention.” It definitely doesn’t deserve attention that should be focused on international relations and democracy abroad. However, I like that Hillary underscores the choices she has and don’t be surprised if you see her all glammed up in the next pictures that are circulated.
Do you think we focus more on how women look than what they do? Does it matter if it’s an image-conscious person or a politician? Is it realistic to say looks shouldn’t matter? Or are we going to “look” anyway?
Oh and Ms Orenstein and I exchanged a few tweets. Her hope was that women use these choices to positive ends versus judging other women and being negative.