Are soup cleanses the new juice cleanses? Giveaway too. 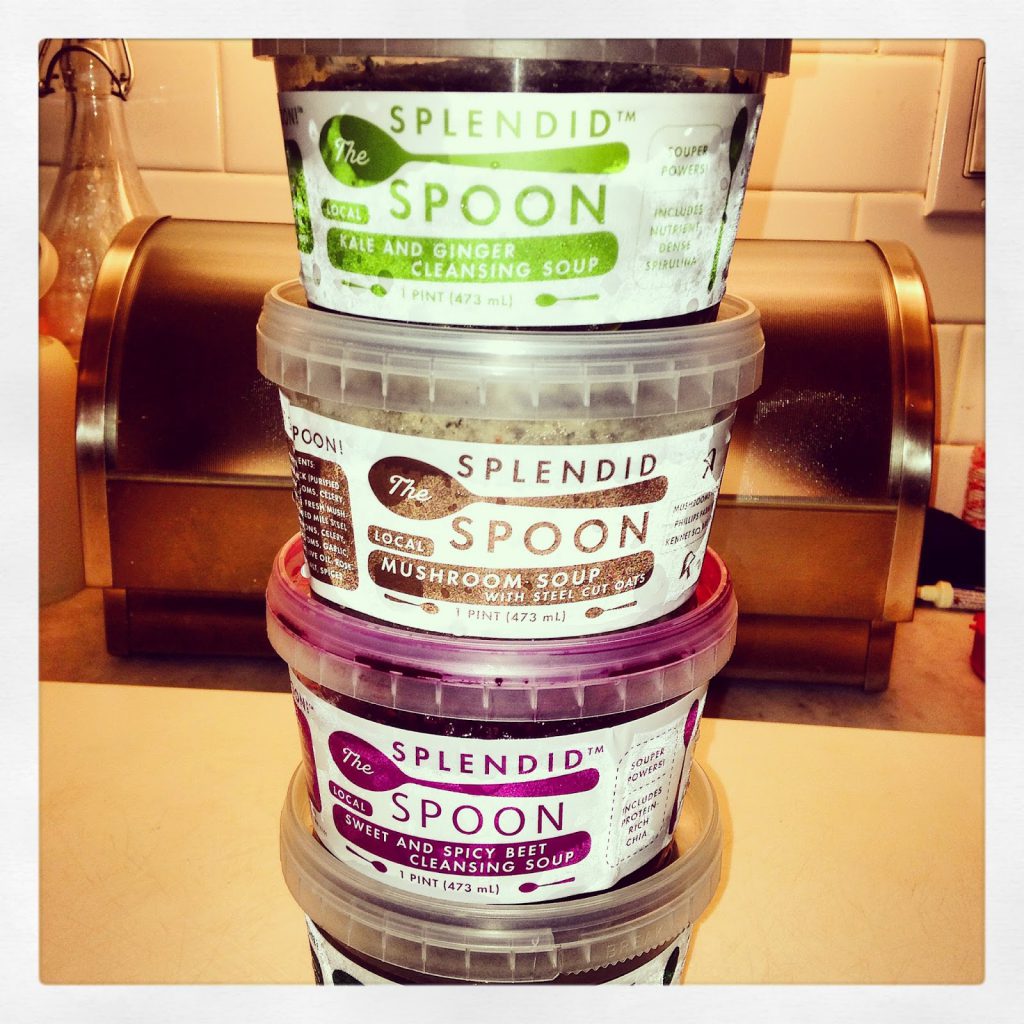 I want to start by saying Carolyn and I love soup. We’ve also been fielding questions about soup cleanses. Nicole Chaszar, the founder of The Splendid Spoon,suggested we meet and taste some of her concoctions but OneSmartBrownie and I had another idea. We wanted to give a full day of “souping” a go. *
Our packages arrived and Carolyn messaged me “they look good”. All of the soups are gluten free and plant based. You receive five soups for the day a mixture of pureed and chunky (chewing=awesome). Always looking at the pros and cons of new regimes I was initially surprised that one soup had steel cut oats, another lentils and one was butternut squash based. As someone who has a fairly low starch, low grain diet this didn’t seem too “cleansy”.
The next morning I woke up ready to go. I scratched my head at whether or not coffee was “kosher” for cleansing but recalled Carolyn’s cleanse mantra “your cleanse, your rules.” I had my typical coffee. Revived and caffeinated I realized I had to transport the still semi-frozen soups to the office. I heated the butternut squash soup first (this seemed the most breakfasty) but also had to heat the mushroom soup. We have no microwave at the office and I’m totally against microwaving in plastic so the logistics of souping if away from home for the day is something to consider. A large ceramic mug  or class container is needed.
The soups are delicious and I was determined to “succeed” as we scheduled our meeting with Nicole/Splendid Spoon mid day. Nicole is a great ambassador for her brand. Every question we had, she had an answer for. The sodium? She will not sacrifice taste and these soups are significantly lower in sodium than other soups. The produce? Nicole prides herself on using local, seasonal ingredients. The calories? Less than 800 in the day (more on that later). The containers are BPA free and the company worked with an RD for this cleanse. Nicole herself will have breakfast and then use the soups throughout the day.
I was headed to my son’s piano lesson but made a quick stop at home for soup #3. I love beets and it hit the spot. It was one of our first chilly days and there was something comforting about the soup but this is when things headed south. It was a little after 3pm and I had a headache. “Starving” I emailed Carolyn to which she replied “I may overdose on saffron pills”.  I peered in my purse and saw one of the new bars we were testing for our store. I closed my purse and tried to listen to the lesson. No luck, I ate the bar without an ounce of guilt.
I know too well that once your blood sugar drops it’s almost impossible to correct it. I know a bunch of things I violated that day.When I got home I knew I had my kale/lentil soup waiting. Lentils have never tasted so good. But I wasn’t done. My boys were enjoying lamb burgers (lava lake, grass fed!) and I was jealous. And so I had one, it was delicious. Carolyn emailed from the office, she was eating nuts and later confirmed “it’s official, over cleanses.”
I debated whether or not to post but decided to go ahead with it. These soups, available on Fresh Direct, are fantastic. I am a protein person, I could see having the soup for a light, veggie dinner or a breakfast (a hot “juice” if you think about it) but I need my “dunch” as I call it. For me (or us) a full day was too much but if you want to give souping a whirl Nicole is giving away one to two cleanses. You can use them as directed or spread them out over a couple of days. Remember- your cleanse your rules.
Have you heard of soup cleanses? Have you tried one? What’s your favorite soup?
To be eligible for the giveaway comment below AND tweet the link to this post and @Foodtrainers has a @SplendidSpoonNY #soup #cleanse #giveaway
*Full disclosure Nicole discounted our 1-day soup cleanses.
Winner of Skinny Gut giveaway is Danielle, your book should be on its way to you.