Are You Skinny Fat? Find Out Why. 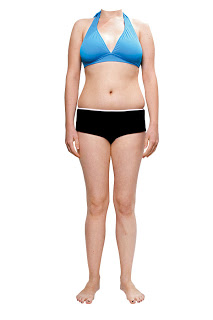 When it comes to meals there’s breakfast and lunch but then there’s brunch. A similar combination exists when it comes to weight, there’s skinny and fat and then skinny fat. Skinny fat is a person who’s thin for the most part but has a high body fat percentage. Skinny fat can also apply to that friend who you think can eat “whatever she wants” and stay skinny. Skinny fat people may weigh the right amount for their height, they may look fine in clothes but under it all there’s extra, some mush, less muscle mass.
What type of exercise makes you skinny fat?
For some reason cardio, in particular spinning, takes a lot of heat for its connection to skinny fatness. A trainer named Charles Poliquin was asked about spinning in Oxygen magazine and let’s just say he was not a fan.
“In spinning exercise, the body adapts by storing both intra-muscular and subcutaneous fat in the thigh and hip areas to provide a more readily available source of fuel for the aerobic recovery periods. The body figures out, if I store fat there it reduces the time to get to the muscles to provide the energy source. Result: Kobe beef thighs and butt, all plump and marbled with fat inside.”
I enjoy spinning (I’m a Flywheel fan) but I think the key word in the harsh (Kobe beef thighs?) quote above is “adapts”. Our bodies adapt to anything. I think those most in danger of being skinny fat, or not changing their bodies, are those who only spin. We need more than spinning and ultimately more than cardio too. Whether it’s superslow training, barre, Crossfit you need some strength work and variety. Getting better at something may be when your body gets worse. And let’s face it,  some skinny fat people don’t exercise at all.
When you eat may make you skinny fat
Another ingredient for skinny fatness is erratic eating.  Some erratic eaters skip breakfast, others “save up” for dinner. Or the biggest clue when I’m talking to a client when it comes to skinny fat is “I’m not hungry.” You’re not hungry when your body assumes food isn’t coming in regularly, so it hangs onto that fat. Hungry people are the ones burning through all their food.
Sitting
This information was relatively new to me. I mentioned it when reviewing Drop Dead Healthy. Sitting isn’t bad because you’re not moving. It’s worse than that. Lipase helps muscles absorb fat. When we sit, we don’t produce lipase so fat can “go off and do naughty things”.
Does Veganism Make You Skinny Fat?
Vegan Diets get picked on for making people skinny fat. I’m not a vegan but it’s not all vegan diets it’s vegan diets or any diet missing one of the following
We can joke at this skinny fat term but doctors are seeing lots of young people who aren’t overweight but exhibit signs of pre diabetes. You can be skinny fat on the inside too. Mark Hyman writes “they are normal weight but metabolically obese with all the same risks of disease and death as the obese. One in seven normal weight kids has pre-diabetes or Type 2 diabetes.”
There are also some skinny fat variables are out of our control. Getting older with the natural decline in muscle mass can lead to complaints of skinny fat. And some may feel skinny fat is fine. The New York Times documented the hipster belly among men that don’t want to be muscleheads. Just one more way I’m not hip.
Are you aware of the term skinny fat? What do you think it’s about? If you spin, are vegan or sit a lot I’d love to hear from you.