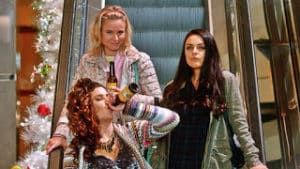 There’s a bit of a brouhaha over the recent Bad Mom’s Christmas movie. I haven’t seen the movie, though I watched the first one. The issue being debated is this concept of a “wine mom” and the coupling of motherhood and alcohol. Is this an innocuous combination?  Or is it concerning, something not to be joked about?

When my younger son was in preschool, we had a playgroup. We referred to ourselves as the Winos. I’m not even a wine lover but cherished these gatherings. Thursdays, late afternoon, we’d meet at one of our apartments. There was wine and cheese (I am a cheese lover for sure). We’d hang out and catch up and the toddlers would do their thing. There were more than a couple of times we pushed strollers home or got in taxis feeling a little buzzed. In the city, none of us were driving, this wouldn’t have been a good idea. As your kids get older, you don’t have parents over as much as kids are independent so I miss those get-togethers.

I had no negative associations between booze and babies for a long time. I started to question things when I attended a discussion of Elizabeth Vargas’s memoir. Elizabeth has discussed her alcoholism candidly. What was eye-opening for me, at this event, were the comments in the audience. One person strongly objected to the “wine o’clock” concept and all the humor surrounding drinking. Another found it difficult to navigate motherhood with so many events centered upon alcohol. I am definitely someone who makes these jokes, posts alcohol-centric items on Instagram and has had wine at some of my children’s birthday parties. I would never like to be insensitive and so it got me thinking.

Despite coming from a family of cocktail lovers, attending Tulane and making a mean martini, I am someone who has never had a problem with drinking. I have always been the person who enjoyed the social aspect of drinking but could also go a week or two without a drink. I am providing this information as I think it’s one end of the spectrum. Healthy drinking is considered a drink a day and I’m, except on vacation, always well below that. Again- this doesn’t make me superior, it just says something about my physiology.

On the other end of the spectrum, this article shows that there is a huge rise in high risk drinking, defined here as up to 4 drinks a day. From 2002 (coincidentally when my first child was born) until 2013 there was a 58% increase in high risk drinking. In my experience with clients, many women fall somewhere between drinking being a non-issue and alcoholism.  And there’s a lot of guilt and questions surrounding drinking. I am not an alcohol expert but I think one drink a day is a good litmus test. If you can have one drink and stop there, I’d say there’s likely not a problem. When that’s impossible, it’s worth looking into it further. Scratch that, I think it’s worth looking into further for all of us. Why we drink, when we drink and how we feel after drinking is an important piece of the wellness puzzle.

Should I not say “cheers” to the weekend?