Last night, I was on my way home from work tired and hungry. I’ve had a couple travel days and as a result my office days are packed which isn’t a problem until the end of the day. I knew the boys would be getting home from hockey and they’d need dinner and I also had brownies to bake. My friend Shari started a campaign called Bake it Happen where you bake one of her mother’s recipes and in the process raise money for breast cancer research. One of the recipes is Judy’s pumpkin brownies.I had the tired thought “do I have to do this tonight?” and quickly reminded myself of Shari’s work and Judy’s battle. I was going to bake.
I would’ve had an easier time if I stuck to Judy’s recipe but no, I insisted on making a gluten free/paleo version. I expressed to Shari my conflict with unhealthy (Minute Made pink lemonade on my recent Delta flight) in the name of disease research. Shari explained she wasn’t looking at things through the lens of healthy she just got such pleasure knowing everyone was making her mom’s recipes. Duh- of course.
Last year I somehow had an easy time Foodtrainers-ifying the banana bread recipe. Things were different this year. On Monday, I gathered a bunch of healthy pumpkin brownie recipes. The boys were off from school and we gave one a whirl. Pumpkin and cocoa and coconut flour, how could it be bad, right? When the consistency and flavor isn’t right, that’s how. The boys gave me the “they’re ok”. So last night was make it or break it. I didn’t have time to experiment so I used this recipe from the jaybird blog.
The photos looked beautiful, the comments were positive and I liked the idea of the pumpkin and chocolate being separate.  As I prepared to bake the cocoa powder was on the tippy top shelf on top of a jar of almond flour. Rather than getting the stepladder, I attempted to pull down the almond flour with the cocoa tin on it. Of course there was a massive cocoa spill.  Half laughing, half crying I cleaned the cocoa mess and the cocoa out of the grout of every tile. When I finally got to work I thought about Shari saying no matter what Judy cooked every night.
I measured and I whisked. I followed the instructions or so I thought.

When it came time to assemble the 2 batters something was off. I was to layer the chocolate and the pumpkin and “repeat” but I only had enough batter for 1 layer of each. 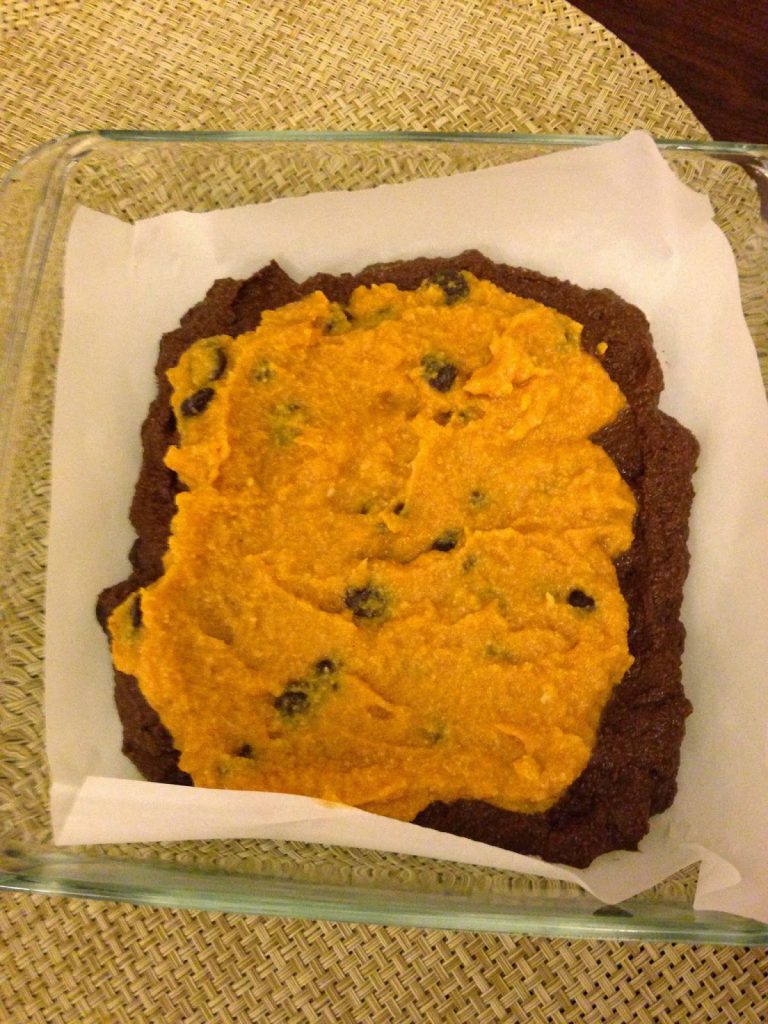 I swirled the top with a chopstick (as directed) and felt pretty fancy.
When the brownies came out of the oven the pumpkin layer seemed a little moist. 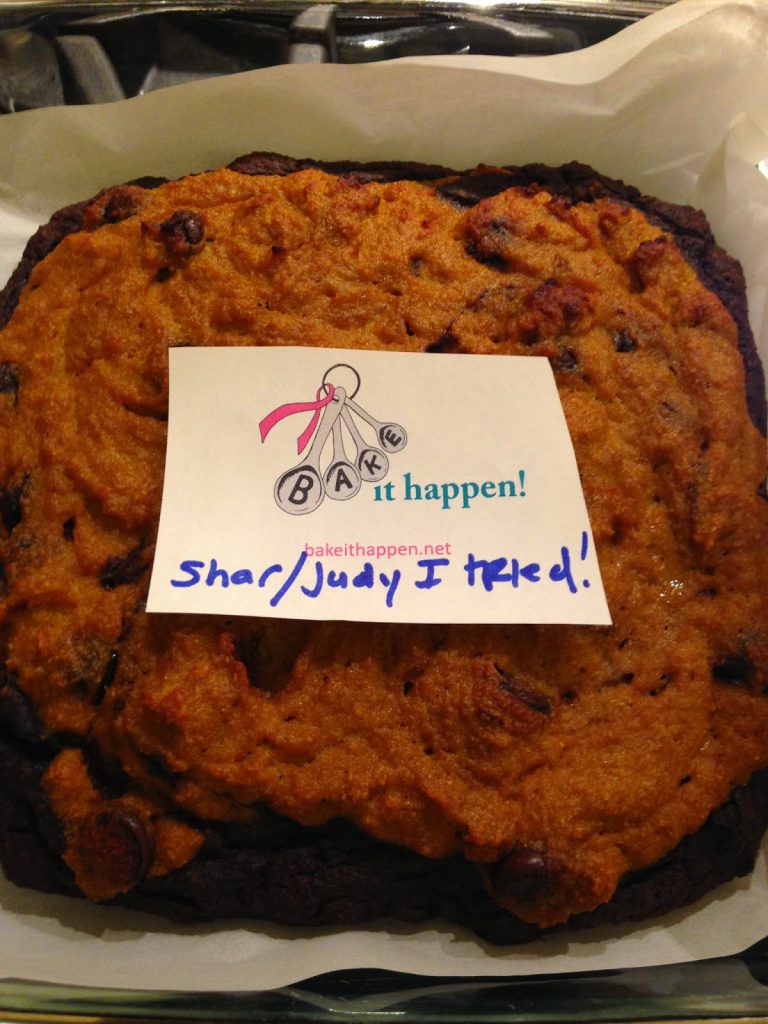 Ugh. I let them cool on the drying rack and cut them up. The boys were now asleep but my husband came in from hockey (yes everyone plays) and grabbed a brownie. I asked for his review and received “well I’d eat them”. He’d eat anything. I can’t even blame the recipe because clearly I am the only one who messed it up. Maybe my baking powder (which I never use) is old? Was I not meticulous enough with my measurements? I’m not sure. 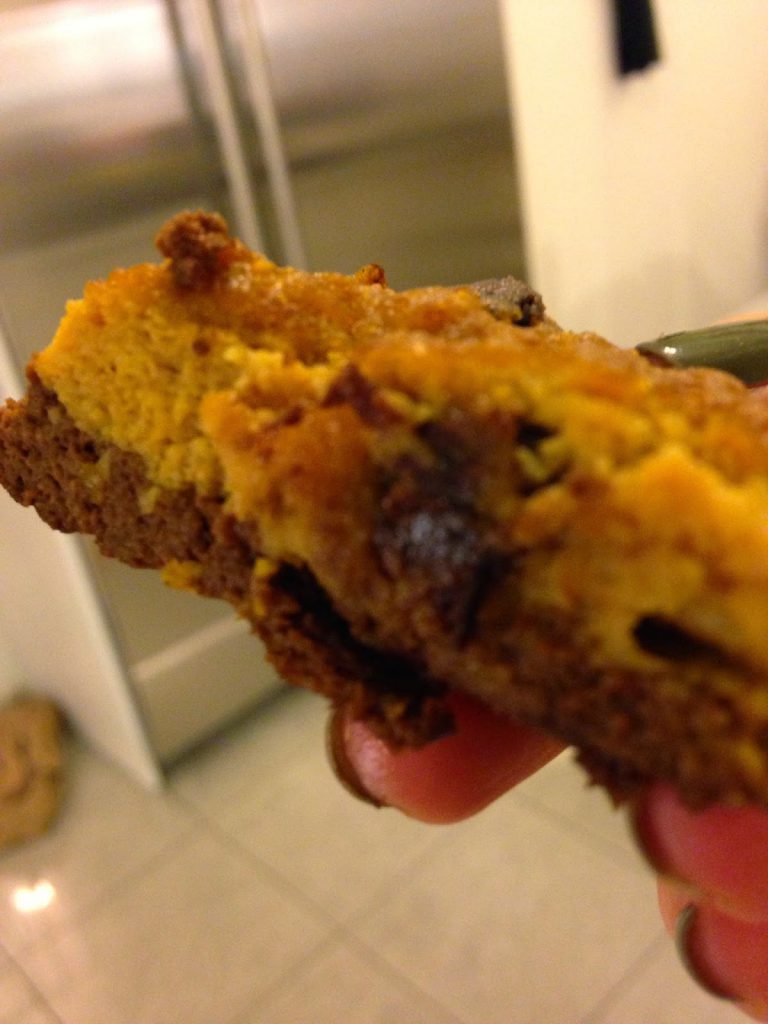 You can try these (and let me know) or try Judy’s delicious version. It almost felt like Judy was trying to tell me something. I didn’t know her well but “just stick to my tried and true version” entered my mind.
Any idea where my brownies went wrong? Do you bake? Do you do gluten free or paleo baking?
On another note, earlier this week I saw a friend with advanced cancer and talked about breast cancer awareness month. Her concern was the percentage of funds that actually go to research, toward a cure not just awareness. She told me of an organization called METavivor that focuses on metastatic breast cancer. This is what Judy had and this is what my beautiful friend has as well. Please check out their site and Bake it Happen.