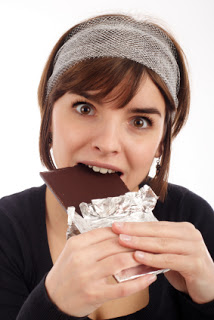 New female clients often ask “how much weight should I expect to lose?” My conservative estimate is one to two pounds a week or three to six pounds a month. Huh (I can see them thinking), “shouldn’t that be four to eight pounds if you’re losing one to two a week”? Yes, but one week is PMS so we can’t count on that one. If you’re female, chances are to some degree you’re familiar with at least a few of the 150 (yes that’s right) possible PMS symptoms. And if you’re male, though not from first hand experience, you’re probably familiar with some of those symptoms as well.  I’ve talked bloating before but today I’m more interested in the effect PMS can have on appetite and eating and what can be done about this.
First, a biology lesson. The last part of the menstrual cycle is called the luteal phase. It is in this phase that the ovaries decrease estrogen production  and start pumping up progesterone production. These two hormones affect various brain chemicals called neurotransmitters and this is what likely leads to mood alternation and PMS symptoms.  Appetite is lowest before ovulation (mid cycle) and highest in this luteal phase. Oftentimes, women reporting appetite changes also experience mood effects. Both symptoms seem tied to serotonin. We don’t all necessarily increase consumption of the same types of foods but low serotonin activity increases vulnerability to overconsumption as serotonin curbs appetite. One study found that caloric intake increased 20% and another showed a 1000-calorie increase in the four days leading up to menstruation. To add insult to overeating, the muscles in the bowels can relax and be less effective moving food through which explains why many women are constipated before menstruation. Lovely.
This can start to seem like a losing hormonal battle but I don’t think that’s the case.  First, just knowing that the menstrual munchies aren’t all in your head should be somewhat comforting. Second, if you know hurricane PMS is headed your way you can start to take precautions such as having the right foods in the house and perhaps taking certain supplements.
A lot of the dietary advice for PMS has to do with fluid retention. While dandelion greens, asparagus, apple cider vinegar are all “delicious debloaters” they don’t address PMS cravings and appetite surges. A few foods that show promise are pineapple, full fat dairy products and sweet potatoes. My PMS eating tips are as follows:
When it comes to supplements there are many suggested but only a few that are well researched. If you experiment I would give supplements two full cycles to see a difference:
Vitex- also known as Chastetree Berry has some research behind it. It is known to balance hormone levels and improve menstrual irregularities.
Evening Primrose Oil- a source of GLA, an anti inflammatory omega-6 fatty acid. In several studies it was found to be helpful.
Rhodiola– helpful for mood, research behind it extremely safe.
B6 or B-complex with 50mg of B6.
Magnesium– a recent study showed those who took magnesium supplements had improvement in their PMS symptoms.
Probiotics– more for PMS-related bloat than appetite or weight gain.
PMS doesn’t have to weight you down. The next time hurricane PMS hits hopefully it will be downgraded and leave minimal damage.
Do you feel like a different person when you have PMS? What do you generally do to ameliorate symptoms? Are any males reading this post? So curious.