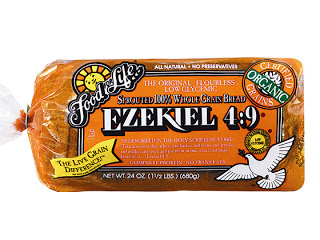 Lisa has a bit more time on her hands with a class-free summer (I should say school-free, she’s pretty classy). She can now contemplate important topics like the perfect (healthy) summer cocktail and today’s query “to sprout or not to sprout”. Thanks for this Lisa.

You don’t have to be a nutritionist to conclude that spouted grains sound healthier than bleached, processed or refined grains. Not only do sprouted grains sound healthier, they really are.
A little background
To make white bread part of the wheat kernel (the nutritious part) is removed and the remaining portion milled into flour. Whole-wheat bread is slightly better, the germ (actually loaded with vitamins despite its name) and the bran are used when making the flour. For sprouted grain bread the kernels are sprouted and then this is used for the breads.
Nutritional benefits
Sprouted grains are higher in nutrients than their unsprouted counterparts. Sprouted wheat contains four times the amount of niacin and nearly twice the amount of vitamin B6 and folate. The process of sprouting also leads to a product that is easier to digest. Sprouting is not new, I learned from the Bobs  Red Mill site it dates back to the 2nd century BC and the Essenes (a Jewish monastic group).
Since sprouted grains products are such a departure from their refined and processed counterparts, they are often referred to as “live food”. Certain varieties have been deemed acceptable by many raw foodists. In my opinion, one of the key benefits of sprouted grain products is that they are higher in protein than other breads. The reason their protein content is higher is because some carbohydrates (from the wheat kernel) are lost in the process of sprouting.
Buying sprouted grain bread
If you haven’t noticed spouted grain products in your grocery store, it’s because you likely haven’t looked for bread or English muffins in the freezer section. Since sprouted grain products are “alive” they are best kept in the freezer or the refrigerator, which is why you won’t find them in the doughy bread aisle alongside those ick white hot dog buns.
My favorite sprouted grain breads are Food for Life Ezekiel 4:9 , Shiloh Farms Sprouted 7 Grain bread and French Meadow sprouted 16 grain and seed bread.
Sprout yourself
I’ll be honest I don’t see myself taking up sprouting any time soon but if you’re dying to sprout your own grains, click here for simple instructions. Report back to let us know how it goes, and how you enjoyed your living food!
Do you eat any sprouted food? Are you familiar with Ezekiel, Shiloh Farms or French Meadow? Does sprouting intrigue you or scare you?