Assume there are 100 cashews here. Assume that’s a portion.

You can binge on anything. Once when I  told a client “you will not overeat on chicken” she swiftly corrected me, “I eat a whole chicken Lauren…well except for the insides and bones.” Interesting. And one night my younger son complained of a stomachache and said,  “I probably ate too many bananas after soccer.”  I asked my son how many assuming he had two or so, he said five. While these instances are rarities, cashew binging is extremely common. You are more likely to overeat (translation the whole package, regardless of its size) cashews that any other nut. You may not find that in a scientific journal but it’s the truth.

I saw 10 clients yesterday. Two reported cashew issues. Foodtrainers will turn 15 in November, I can’t believe it has taken me this long to conduct cashew research but I did and have a theory. Cashews are carby. I know that sounds as dumb as when people claim carrots are sugary. Cashews have four times the net carbs (carb grams minus fiber grams) of walnuts or pecans and more than double the carbs in almonds. Grace, our resident researcher, and I both poked around and she concluded; “only chestnuts have them beat”.  When I offered this explanation to one of my cashew challenged clients she said, “I think it’s the texture, think of how creamy cashew milk is.” She has a point. Cashews are the most widely used dairy alternative. So there are the carbs, the texture and there’s also a natural sweetness of cashews…shit.Here’s where science tells a different story. On PubMed I read of a study finding that cashew extract improves insulin function and the “damaging effects of high blood sugar”.  So cashew extract has anti-diabetic properties whereas cashews (and cashew addiction) give you diabetes. Another interesting tidbit, you don’t see cashews in shells in stores because the shell of the cashew is poisonous.

For this reason, cashews are heat treated before being shelled so; raw cashews are never really raw. And I’ll add that “raw” cashews are binged on too.When we convened our office cashew conference, we formulated our addiction advice. We joked that we should all eat the shells as a deterrent but are not in the business of poisoning people. Carolyn voted to remove cashews from the Foodtrainers’ nutcase. Instead, we agreed to advocate cashews via nutcase only. That way, you avoid over-nutting (thanks Well and Good for the shout out). Are you a cashew addict? Or, what do you feel are the most bingeable foods? 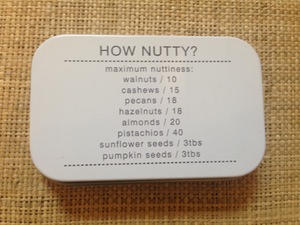 Betcha can’t have 15…unless you have a nutcase