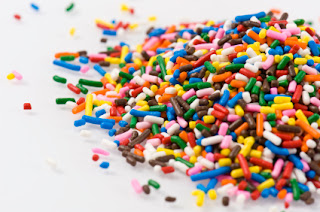 On Thursday I am giving a nutrition talk at a preschool in Manhattan. I plan to cover a few topics: organics, healthy snacking and vitamins. When talking about snacks for kids and vitamins I find it impossible to ignore the topic of food dyes.  Certain artificial food dyes have been shown to be carcinogenic to animals, others affect mood and intensify ADHD and a few are associated with fertility even sterility. This is not a laughing matter. I bet you’re wondering how these dyes are approved for use; I don’t blame you if you do. The British government has urged companies to stop using most dyes, and the European Union requires a warning notice on most dyed foods. In European countries these colorings are considered hazardous until they can be proven safe. Sadly, in the US we have the opposite approach. These colorings are safe until proven otherwise.  As a consequence, Kellogg, Kraft, McDonald’s, and other American companies that do business in Europe use safe, natural colorings over there — but harmful, synthetic chemicals here. As far as I’m concerned, this is a case where the proof may indeed be in the pudding and I’ve already reached my verdict, read on and see what you think.
I asked Lisa, Foodtrainers’ favorite nutrition nerd to provide answers to some questions I’m “dye-ing” to know:
I always tell parents the food dyes are more likely to blame for hyperactivity than the sugar, what does the research show?
A British study reported in “Archives of Disease in Children” in 2004 found that hyperactive behavior increased in children given food coloring plus sodium benzoate, a preservative. Hyperactive behavior decreased when the additives were withdrawn. A 2007 study published in The Lancet showed that children have increased levels of hyperactivity after consuming drinks laced with food coloring. According to the Mayo Clinic, yellow food dye no. 5, no. 6 and no. 10, and red no. 40 all cause an increase in hyperactivity. Food additives that may increase hyperactive behavior include: Sodium benzoate, Yellow No. 6 (sunset yellow), Yellow No. 10 (quinoline yellow), Yellow No. 5 (tartrazine) and Red No.40 (allura red) Yellow No. 5, used in beverages, candy, ice cream, custards and other foods, may be more likely to cause reactions than other additives. The Food and Drug Administration requires that Yellow No. 5 be clearly labeled on food packaging along with other ingredients.  This label is just indicating Yellow 5 is in the food. This is not a warning label.
People may think food dyes aren’t an issue if you don’t eat candy or neon-colored food but food dyes are found in some sneaky places, aren’t they?
Food dyes can be found in pickles, some farmed salmon, certain mustards, granola bars and Life Cereal. As you see from this list, food coloring is lurking in foods that seem pretty much colorless. And another place dyes are used is in medicine. Specific colors are not always listed but look for “color added”, “artificial color” or “artificial coloring added.”
Aside from mood, what more serious things are dyes connected with?
According to the Center for Science in the Public Interest, food coloring such as blue no. 1, red no. 40, yellow no. 5 and yellow no. 6 cause allergic reactions. Yellow food dye no. 5 has triggered asthma episodes in children and other dyes, such as red no. 40, cause skin conditions such as eczema. Yellow #2 has been connected with male sterility and ADHD. Blue 1 and Blue 2 used in beverages and often in pet food has been associated with brain tumors in animal studies and Red 3 is linked with thyroid tumors.
What are examples of healthy ways to color food?
Better choices include annatto extract (yellow), dehydrated beets (bluish-red to brown), beta-carotene (yellow to orange) and grape skin extract (red, green).  These colorings are not required to be named and you may simply see colorings or color added. For home use matcha green tea powder, beet juice (makes icing pink), cocoa and avocado can be used. Here is a recipe you’ll love for frosting for St Patrick’s Day.
Thanks Lisa, this is great information. My advice is that everyone needs to check their food labels particularly for foods they consume regularly. If these foods contain dyes consider switching to a product that doesn’t.  And parents, know that when children leave a birthday party their behavior is not due to a “sugar high.”
Do you look for food dyes on food labels? Have you ever had a reaction to a food dye? Are you at all shocked that these are approved for use?


*Congratulations to Gayle, she’s the winner of the Hardwick giveaway.