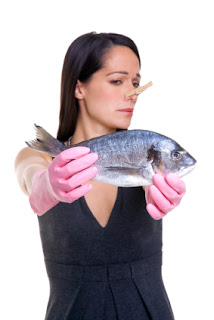 Ichthyophobia is the fear of fish. This applies to eating fish or seeing dead fish. Galeophobia is the fear of sharks. I propose urban pescephobia the extreme fear of cooking fish in small apartments due to the potentially intense, traumatizing and lingering odor. Eating fish provides omega 3’s, an excellent source of lean protein and, in my opinion, assistance with the weight loss process.  However, it’s hard to convince a cooking pescephobe to “get back in the water” after they’ve experienced days of eau du fish. There’s no coincidence that fishy has 2 meanings. One meaning is “suggestive of fish” and the other “suspicious”.  In addition to cracking a kitchen window or using the exhaust on your stove here are some ideas to help conquer your fish cooking fears.
My two preferred ways to minimize odors when cooking fish are to steam fish or cook en papilliote (hows that for a fancy term). I have a calphalon steamer that sits fits into a pot and gets covered. For “en papilliote” I like to make parcels of fish and vegetables with a drizzle of white wine and cook in parchment paper.  I asked a few cooking friends for their suggestions:
Jenna Helwig from Rosaberry and our recent Cooking Company post offered this advice:
“I love roasting fish in the oven instead of cooking it on the stovetop. That really cuts down on the fishy smell, and it’s so simple. Line a pan with parchment paper, drizzle the fish with olive oil, sprinkle with salt and pepper and bake at 400 until just cooked through. Spritz with lemon after it comes out of the oven.”

Julie Negrin, author of Easy Meals to Cook With Kids suggests “two cooking techniques that usually don’t cause as much of a “fishy” smell are steaming in bamboo steamers – Asian style and poaching.” Jennifer Clair  of homecookingny points out that the type of fish can make a difference.  “Lean fish cuts down the amount of fish oils in the air which make odors stick around longer. Salmon trout swordfish out, tilapia tuna and cod in.”

Some other ideas:
On one of the boards, a commenter enthusiastically wrote, “I learned from Alton Brown that frying fish in Crisco produces no odors.” This to me is replacing one problem with another and not Foodtrainers-approved but pretty funny.
Do you suffer from urban pescephobia? Does this exist in the suburbs too? Any tips or techniques you use to mitigate fishiness?  Are you going to try to conquer your fear?