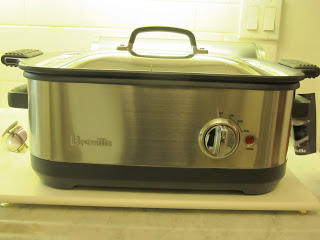 A month ago, I satisfied my school cravings and assigned myself cooking homework. My goals were to buy and use a slow cooker, to enter the scary world of baking and, for extra credit, make a dish without a recipe. Many of you jumped on the homework bandwagon formulating your own personal cooking goal.  In retrospect, my course load was a little heavy. I was mainly interested in slow cooking but included the baking and recipe-less items for an extra challenge.  Most of you were much smarter and picked a singular goal. Going forward, that’s what I’ll do.

My beautiful new slow cooker (above) arrived shortly after last month’s post. I chose a Breville. I own a Breville juicer and wanted a larger slow cooker. I love that it has an insert so you can brown things before slow cooking.  Because every class needs a textbook, I chose Make it Fast, Cook it Slow by Stephanie O’dea. Stephanie has a blog called A Year of Slow Cooking. She vowed to use her slow cooker every day for a year.  I loved that these recipes were simple, that most were gluten free and that a “verdict” is included telling you who liked the recipe in her family and who did not. 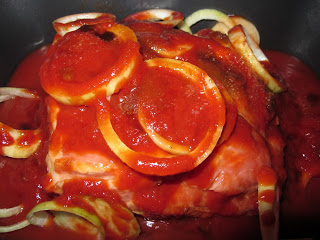 There was no question what my first recipe would be. We stop at a place on the way to Vermont that makes the best pulled pork on the planet. When I thought about slow cooking, stewy things came to mind. My book contains a pulled pork recipe but like a true nerd I had to cross-reference. I found that a pork butt roast was the cut to use. After being briefly nauseated I learned this was not in fact the pork “rear” and located an organic roast.  I made the recipe on a Saturday; if you’re an impatient person I wouldn’t suggest slow cooking while you’re hanging around the house. Eight hours later, dinner was done. All four of us loved it.
The boys were excited about our new addition to the family and I let them pick my next recipe. They choose an apple crisp.  While this was also delicious, “crisp” is a little misleading. Despite some hanging out under the boiler, there wasn’t anything crispy happening. Nobody objected; we used it as a topping for Greek yogurt. 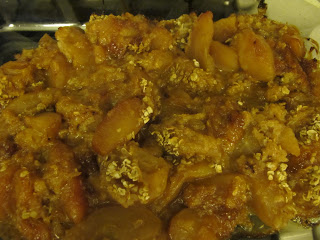 Finally, on a day I was taking the boys to a birthday party that ended at dinnertime, I decided on Split Pea Soup.  This was as easy as could be and again the aroma was amazing. The only problem was this soup was thick and filling. I could’ve thinned it a little bit but was too excited to dig in. 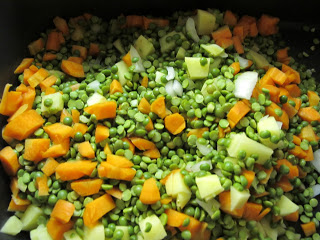 Cooking Homework Month 1: Grade is B.
For some inspiration, here were some other assignments:

Erin– to experiment, she said homework would be “easy” for her, wonder if it was
Jenny– 2 new recipes from her cookbooks
Specific Homework
Madeline– to make Korean food with her mother in law
Jess- to make Butternut Squash Mac and Cheese
Allison– to cook one new veggie a week
Caron– to cook kasha
This month I’m going to continue slow cookery, I’m going to focus on a chicken dish, an oatmeal something and using The Indian Slow Cooker book I purchased.
Did you do your homework? What grade would you give yourself? What’s your assignment this month? With Christmas, I’ll set our deadline for early January.