Do You Know What Happy Calories Are? 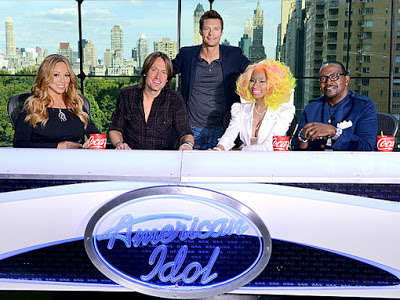 I’ve previously outed myself; I watch pretty lousy TV, American idol included.
A new season of Idol started last week. As much as it pains me to watch the judges sip from their gigantic coke-emblazoned tumblers. I understand corporate sponsorship and here it is loud and clear. What got me way too worked up at a time I was counting on mindless relaxation was the Coke commercial that debuted during this episode. Not to worry if you missed it, it’ll air again during the Super Bowl pre-game show.
The commercial begins with that combination fart/explosive sound of a can of soda opening. The caption reads “happy calories”.  When I think of soda, I think of diabetes, sugar, caramel coloring, reproductive issues, osteoporosis and many other far from happy things. Coke is going to sort this out for me.
Cue the music and one of my favorite singers, Ingrid Michaelson’s song Be Ok. It’s catchy. If you don’t know it you can listen here.  I have since found out the song has been used to promote Motts applesauce and Ritz Crackers and has been used on numerous television shows.
The lyrics start “I just want to be ok, be ok, be ok, I just want to be ok today.” I have nothing against okay-ness. What I take serious issue with is figuring out a sneaky way to present Coke as OK. You see, there are 140 calories in a can of regular Coke and Coke shows you how you can burn these negligible 140 calories laughing, dancing and walking your dog. So that’s OK right? Drink “happy calories”, laugh, dance and we’re all good?  Word from the Coke camp was they felt people had skewed notions of the calories in soda and they wanted to set the record straight or so they say. I say crooked.
During Idol I tweeted to Ingrid Michaelson, because I am like that and couldn’t help myself, “is drinking coke ok”? Shockingly she didn’t respond but was tweeting that same night about overeating granola.  I guess after all the money from the endorsements, any calories are “happy” to her.
Coke and all soda for that matter are not ok. Chemicals aren’t something you laugh off.  Coke can twist the truth and employ all the pretzel logic they’d like and it’s still Coke. I promise you they do not have your happiness and wellbeing in mind in that advertising office (David The Agency).
It’s one thing to sell something that’s unhealthy. It’s unacceptable to justify how it can be part of a healthy lifestyle.  Can you imagine if the same reasoning was used for Vodka? “I just want to be ok, be ok, be ok and that includes having a martini everyday?” Then cut to all the ways you can burn off that vodka?  It’s so much easier to tap your feet to the catchy song and tune this all out but we can’t really afford to do so.
Do you think Coke’s tactics with this commercial are reprehensible or just part of advertising? What do you think can be done to tell Coke that walking your dog doesn’t undo the soda damage? How do you feel when a musician, actor or other public figure you are a fan of endorses something like this (Beyoncé and Pepsi caused a stir recently)?