Does Fast Food Have to be Fat Food? 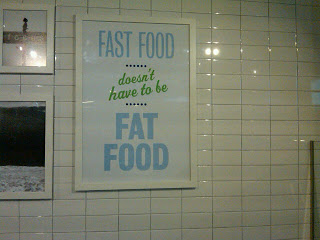 I love to cook and get a true thrill out of menu planning but there are times when I’m delayed or simply lazy. On our weekly treks to Vermont, I pack snacks and sometimes choose to starve my family versus stopping at the gross and “golden arches” but there are times when we get stuck. Last ski season, it was a hailstorm that forced us to make a pit stip. I wrote about this “adventure” in Fast Food Slaytons but would prefer not to recap this experience. As we cruise through states, past the many exits I scan the signs looking for an appealing fast food option. How I wish there was an Energy Kitchen somewhere along I-91.
Energy Kitchen makes healthy fast food. They recently opened an UWS location a few blocks from the Foodtrainers’ offices. In my not so well cropped photo above, you’ll find a sign from Energy Kitchen that reads, “fast food doesn’t have to be fat food.” Energy Kitchen offers a healthy menu with salads, entrees and burgers (bison, veggie, ostrich and more).  Nothing on the menu is over 500 calories.  We received a bunch of tweets and email about EK recently, mostly asking if these calorie counts were “legit” or “too good to be true.” Kelly, from Energy Kitchen reassured us that their prep team pre measures all ingredients each morning. EK also sends all items to a lab for nutrition analysis before adding a count to the menu. So yes, the calories are legit and they take portions and health seriously.
I realized when preparing for this post that I had a problem. I get the same items, with little variation, every time I go to Energy Kitchen. I love the Grilled Salmon, which comes with 2 sides. My 2 favorite sides are the asparagus and the black bean and mango salad (you’re not going to find that at Mcwhatever).  I also love the sweet potatoes. Today at our lunch meeting others had the chopped salad (sans blue cheese) and the salad with seared tuna which both got rave reviews. I had the lentil soup with mixed veggies on the side, also really good. We were pleased to hear the veggie burger used at EK is organic and that the sirloin is grass-fed. If the salmon were wild and the vegetables all organic, I would contemplate hanging up my apron.
There are a few other chains in NYC serving healthier fast food, these are:
Pita Grill
Better Burger
Pump Energy
For those of you that aren’t in NYC and can’t wait for an Energy Kitchen to open near you, here are some other Foodtrainers favorite “fast food” restaurants nation-wide:
Pret A Manger:
True Food Kitchen
Panera
Chop’t
Right now Energy Kitchen has 10 locations, mostly in Manhattan. They do have 55 East Coast franchise agreements from Miami to CT. Kelly tells us they have “agreements in place for Long Island, Connecticut, Westchester, Queens, Brooklyn, Florida, Boston and Washington D. C.” I don’t see Vermont on that list but maybe one day (or maybe I’ll open it).
Have you been to Energy Kitchen, what did you think? Are there any similar concepts in your area? Do you think healthy fast food is an oxymoron?
Leave your comments; one of you will receive a $20 gift card to Energy Kitchen (thanks EK).