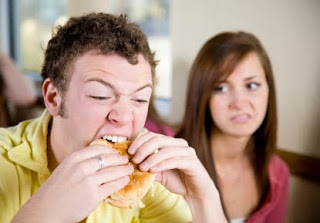 My boys’ birthday party was winding down this past Friday when my friend’s husband pulled me aside. “You have to talk to S*” he said. “Is everything OK” I asked. “Not really, you need to talk to her about  all this healthy cooking I just need some dude food.” I promised friend’s husband that his wife and I would brainstorm some ideas. Bear in mind my friend S will not even consider moving to the UWS, despite her children attending school here, because her beloved yoga studio is on the East side. She is definitely nutrition-obsessed, which I mean only in the best way, and I’m sure she loves the meals she’s cooking and thinks they’re good for her husband.

Then yesterday, as I was going to bed, I noticed a collection of sorts near my husbands’ night stand. In this collection was his foam roller, those perfect push-up thingamajigs, a pair of dumbbells and an exercise band. I mentioned to husband that these things didn’t belong in our Zen-like bedroom (and also added that they were smelly and ugly and that the housekeeper had just come) to which, as he always does, he said “is it really such a big deal?” Though in retrospect it is not a big deal, the fact that he is regularly using those things as I frantically race to get the kids out of the house or try to sleep is cause for a little tension.

On one hand, eating well and exercising are things we all want our spouses to do. After all, if you love someone, don’t you want them to be healthy? Few would argue with that and yet most couples have issues over each others’ pursuit of fitness. I hear it from clients all the time. “I would lose more weight if only my wife would cook a little.” Or, “my husband gives me a hard time if I don’t share a bottle of wine with him.” There are a few different variables at work here. One theme I see is that both men and women resent a sudden change. If your wife was always willing to share dessert and suddenly stops this can be cause for conflict. Problems can also arise when one person’s healthy habits result in increased responsibility for the other. If, for example, your husband is the one to get the kids up in the morning and then starts going to the gym at 7am- find me a wife that’s going to be totally ok with this. I think we want our partners to feel good as long as their regime or routine doesn’t affect us!
Have you ever argued with your significant other over eating or exercise? Do they have healthy habits that irritate you or vice versa?

*Not 100% sure my friend wants to be outed even though we’re only outing her as a healthy cook and yogi.
And for S’s husband, Rocco Dispririto has a great cookbook out called Now Eat This! where he tweaks comfort food favorites from jalapeno poppers to sloppy joes giving them a healthy twist.