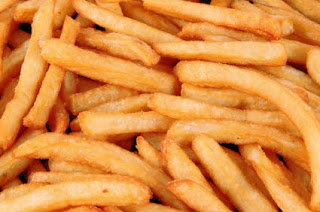 Our family travels to Vermont (from NYC) almost every winter weekend. Interstates can present a huge challenge for healthy eating. Since the ride is only 3.5 hours, on a good day, I generally come armed in order to avoid stopping for food. This past Friday, we picked the kids up from school. I had apples and bananas, carrots and celery, almonds and some popcorn. It’s a little cruel but I’ve found that when trapped in a car and hunger sets in even crudite becomes a hot commodity. We arrived in Vermont for dinner and everything worked out as planned.

Yesterday was a little different. We skied in the morning, had a nice lunch afterward, packed the car and headed home. The problem is that it was snowing fairly heavily. As we entered Massachusetts the snow turned to sleet and a little further south torrential rain. After watching James and the Giant Peach and taking a long post-ski nap the kids were hungry. It was 7pm and we were over an hour from home. The arsenal of healthy snacks was exhausted, as was my husband aka the driver. “There’s a _____ in New Haven, we should try it” says tired husband (and no, he didn’t actually say “blank”) . “Do you know what I do for a living?” I ask. “This is pretty good actually, let’s try it. Without outing the restaurant, let’s just say even President Obama is known to be a fan. Anyway, you know where this is going.

I was elected to go into _____ and pick up our dinner. I decided it was a challenge. I have had a McDonald’s salad, a Wendy’s baked potato and felt fairly confident I could navigate any menu. That is, until I saw this menu. The menu is a very simple: burgers, hot dogs and fries. There are no attempts at health, no salads, and no apple dippers. I decided it was one meal and choices were limited. I did a silent anti-e coli prayer and placed the order. I ordered the little burgers for the kids, I ordered “a burger all the way” for my husband, as he requested. I ordered fries, a weakness of mine, and the person taking the order said “just one order of fries with 3 burgers?” I said yes, that would be fine.

I was handed a receipt; we were number 38. I was directed to another counter to wait for our order. I generally love an open kitchen, love to see the behind the scenes details, that is until last night. As I took my place at the counter I saw an employee hoisting a bottle the size of Clorox bleach, a large handled plastic bottle. She removed the cap and proceeded to pour gallons of something into an opening. I looked closer and the jug was oil. I could’ve turned away but of course didn’t. One station over from the oil was the grill. I looked at the grill which had at least a half inch of…oil on it. The burgers were almost floating like mini sting rays on the surface. I couldn’t believe others were watching this undeterred. Didn’t Elie Wiesel say one of the worst things you can do is witness something terrible and do nothing? In my defense, I am doing something now (I am blogging about it).

After about five minutes (_____ prides itself on being made to order), number 38 was called. I was handed one brown bag with the burgers. I was passed another brown bag, about half the size of a grocery brown bag. The server said “these are your fries.” Polka dots started to make their way through the bag (with I kid you not 5+ cups of fries). These were oil polka dots of course.

I got in the car and started handing things out. The boys opened their little burgers and my husband his “all the way” burger with a diet coke as per his request. After all, why not have a little cancer with your heart disease? I took a handful of fries, some pathetic celery stalks still in the snack bag, my water bottle and decided this probably wouldn’t kill me. Because I am here typing, you know I did live but that doesn’t mean I didn’t suffer. My 7 year old started the chorus, after his burger he had the burps. Husband then remarked “I always get this sharp pain in my stomach after eating this food”. My little one then said “excuse me” which only follows one bodily function. And me? I felt like Morgan Spurlock in Supersize Me…only I hadn’t had anything supersized. I had a headache, my stomach was doing flips- it wasn’t pleasant.

But how did it taste? Was it good? Here’s the deal, despite doing what I do for a living I can admit, however bad for you, when something tastes good. I even have a list of bad-for-you foods I like and wish was healthy. The boys, they liked their burgers and also liked what they knew was a break from our routine. My husband admitted “it’s really not the burger I would have if I had to choose.” As for me, the fries were undercooked, very salty and, sad to say, not worth it. That’s the part I most regret. My advice to clients, my mothers’ advice to me has always been “don’t eat it if it’s not delicious”. Next time, I will bring snacks and a meal for all. And if _____, who has America’s attention, wants to make a nod in the healthy direction, I’d be happy to help.

What do you arm yourself or your family with when you travel? How do you feel after you eat fast food?