For the most part, I’m not a fan of taxi TV.  On my way to or from work, after talking all day, I don’t want to hear anyone talking (and sorry drivers, I don’t want to talk to you either). I have approximately 7 precious minutes to chill before life’s soundtrack begins and so I generally hit the off button when the monitor automatically starts. One day though, a Lauren Glassberg segment was on. She does food and restaurant stories and was profiling a husband and wife team who produce artisanal nut milks. I entered the name in my Blackberry and placed an order as soon as I got to work because I’m compulsive like that.
The company is called OMilk. I love that Julie and Greg started it last summer while trying to get in “crazy shape” for their wedding.  I ordered their almond milk, cashew milk and a flavored milk I’ll tell you about in a bit. I received an email that my milk would be delivered Wednesday evening but completely forgot. Let’s just say Marc was more than a little confused when, during the Rangers playoff game, someone rang out doorbell and handed him some milk bottles.
The next morning I started experimenting. As much as I love dairy, I feel better when I limit it. I used the almond milk in a smoothie with hemp protein, avocado, frozen pineapple and fresh mint. I tried the cashew milk in a cappuccino. The one place most nut-milks do not cut it for me is in coffee and I must say this cashew milk is creamy stuff. These were nothing like the watery supermarket non-dairy milks I had tried. However, I didn’t try my favorite OMilk until Saturday. It was late afternoon and we had plans to go out that night. I poured a cup of this over ice for a little pick me up. 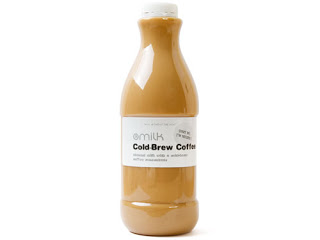 It was delicious. OMilk uses strong cold-brewed coffee, their almond milk and a touch of agave. I could see drinking a lot of it this summer. They also have Spicy Mexican Chocolate Almond Milk they concocted for Cinco de Mayo. OMilk is preservative free and available via delivery to the 5 boroughs, it’s also at Dean and Deluca and coming soon to Whole Foods Tribeca.
Coincidentally last week I received a Facebook message from an old camp friend. She had a nutrition question and randomly asked if I made my own almond milk. Sheepishly I admitted I hadn’t but was loving these local nut milks I had delivered.  She said:
Re: making almond milk. It’s pretty cool to see the process you just soak 1 cup of almonds over night. Drain then purée in the blender with 2 cups water and whatever else you want (honey, dates, etc.) It turns white and frothy. Pour and press through a fine strainer. Voila. Almond milk! Try it once, then go back to your deliveries.
I would like to try my own one time but right now I’m fine outsourcing my milk to Julie and Greg.
Have you used almond or cashew milk? Every tried to make your own? Do you enjoy silence or do you prefer din and activity around you?