Have you heard of Fem-vertising? It’s related to advertising. 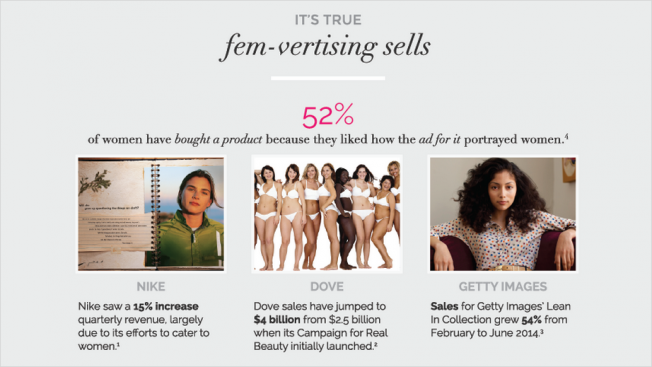 Are there people who still watch the nightly news? Friday or Saturday, my son left the room and NBC news was on the TV. I wasn’t watching or not watching. I was on the computer when a segment on a new trend in advertising, called Fem-vertising was discussed. Fem-vertising has to do with pro female campaigns. Fem-vertising surveys have found that more than half of women buy products when they like how their ads present women. Interesting, while I love a good commercial I buy a product because I like the product.
I can appreciate a great story or ad. The ballerina MistyCopeland’s story?  It’s a great story. I think her message is great for young people and honestly great for not-so-young people. Breaking down stereotypes, good stuff. Maybe I’m an advertiser’s nightmare but I had to look up who the ad was for. I have a great running turtleneck from Under Armour, my kids (boys- nobody thinks of young boys in any of this, I guess “they’re boys” and their self image is fine” ..yeah) love their shirts.  I also liked the “run like a girl” spot. Again, forgot this was for Always (maker of “feminine products). Nobody is pointing out the 6 year olds used in a panty liner commercial (weird). Yes, “you throw like a girl” is insulting but the best revenge? Throw well.
I’m also not anti women being sexy, I’m not buying Pepsi (obviously) but the Sophia Vergara commercials were fantastic. Seems 94 percentof women think, ”using women as sex symbols is harmful to the gender.” Really? Can we not be sexy or funny or inspiring? Aren’t all sorts of images what we want to see? I never bought into the brand of feminism that banned sex appeal.  Now if we’re talking women presented like whores? I object. I saw a Viagra commercial this weekend and couldn’t imagine the woman not only pushing Viagra (eek) but rolling around in a bed using her “sexy voice”. Blech.
Don’t get me wrong; I love good messaging whether it’s on a blog post, Instagram, in a magazine or an ad. I just feel we’ve come to far to be condescended to by advertising agencies. I picture  (mostly male) execs in a room strategizing “ooh say this the women will really go for it.” The Dove ads are fantastic but if Dove wants me to buy their products they should work on their ingredients.
Have you heard of fem-vertising? Or seen the Copeland or Like A Girl spots? Do you think it’s positive messaging? Good for women? Or condescending?