Have you Shakshuka-ed? With this giveaway you will. 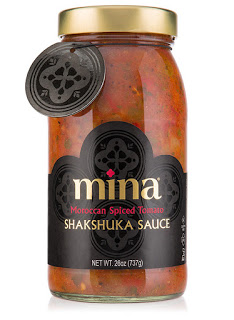 There are only so many ways to reinvent breakfast. Smoothies, yogurts and toasts are great but I end up returning to eggs. We always have (omega 3) eggs in the house and they keep me satisfied. I’ve had Shakshuka a few times out for brunch but never made it at home. It seemed like it had to be more labor intensive than a scramble or omelet. Well, it isn’t.
We used Mina’s harissa in our super bowl #coocoo4cruditevideo. Some corrected my pronunciation telling me it was “hah-riss-ah” not “hah-ree-sah”. Mina emailed after she saw the video, I apologized for botching things and she said,  “don’t listen to anyone… you’re absolutely saying it right! That is the way we pronounce it in Morocco. Ha-ris-sah, is the American way, which is OK, but keep saying it the way you are.” OK then. 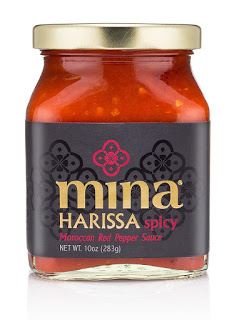 In the same email Mina mentioned their new Shakshuka sauce. She graciously sent a jar over. I was intimidated or assumed this wasn’t something I could make for a weekday breakfast…this time I was wrong.
Yesterday, I finally read the Shakshuka instructions that basically said I should pour the sauce in a pan, heat it up, crack eggs on the top, cover and cook for five minutes. No oven (I think some recipes involve baking), 10 minutes start to Shakshuka. I was a little disappointed in my presentation but the taste didn’t disappoint.
You could use as little as ¼ of the jar and two eggs for a single portion breakfast. 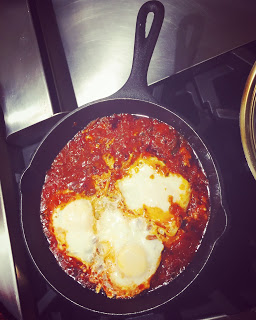 Want to try this? Mina actually sent two jars, as she knows we like to share.
To enter, please tweet
Bored with #breakfast? Say Shakshuka..@Foodtrainers has a  Mina @harissa jar with your name on it . Details here https://foodtrainers.blogspot.com/2016/02/have-you-shakshuka-ed-with-this.html
AND comment below.
Enter by February 29th (leap year)
Have you tried Shakshuka? What are your go-to breakfasts? Would you email if you thought someone was pronouncing something wrong?