Healthy Indian Food at Restaurants and at Home 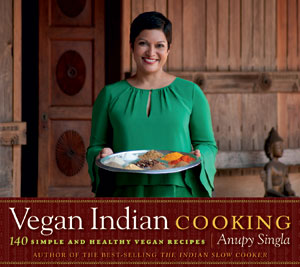 We are having dinner with good friends tomorrow night. As we made plans, my friend said, “you pick the place, we’ll do anything except Indian.” In no way did I have my heart set on Indian but in a city where even toddlers eat sushi and Thai, I find my friend’s Indian avoidance is way too common. Plus it’s probably my very favorite cuisine. While some people are coming around to Indian food, many remain unfamiliar.  Clients are often flummoxed when they’re headed to Indian either because they’ve never been or perhaps they feel it’s an unhealthy cuisine. Time to clear up the confusion.
Here are some simple suggestions for healthy Indian restaurant food:
Of course, the best way to sure healthy Indian is to take matters into your own hands.
So while we’re likely going to a seafood restaurant tomorrow, I was thrilled to be was sent a copy of “Vegan Indian Cooking” by Anupy Singla. This chef’s “Indian Slow Cooker” book made our ski weekends much more delicious last winter and both the chicken curry and chicken tikka masala were favorites.
I have enjoyed this book just as much. The book starts out with basic recipes such as one for cashew cream to replace dairy in recipes. There are fantastic ways to use grains from dosas (which my family loves from Hampton Chutney in New York) to my new favorite Chickpea Flour Crepes. My kids have been loving the Spiced Stovetop Popcorn. There are also handy recipes for beans and lentils to be cooked in the slow cooker.  And for you Brussels sprout people how about Masala Brussels sprouts? Some of the recipes can be found on Anupy’s blog Indian AS Apple Pie. I can see this book being the go-to resource for healthy Indian home cooking.
I don’t usually read the forward in cookbooks but I did in this case. There’s a great section in the opening pages entitled Indian Food Myths. Indian food doesn’t have to be spicy, heavy or unhealthy. It doesn’t have to be complicated either. Naan isn’t served in most Indian homes and finally the slow cooker is Indian (you’ll have to get the book to figure that one out, interesting). I may send these myths over to my friend to see if I can convert her.

In honor of my 500th blog post (not really, just realized that as I started writing), Anupy is giving two hungry readers a copy of Vegan Indian Cooking. To be eligible, comment and tell us where you are on a scale of 1-10 in terms of Indian food love. What are your favorite Indian foods? Or, you can tweet about our Indian Cookbook giveaway @Foodtrainers on twitter.
You have until Friday 9/14 to enter. Congratulations to the Olove winner Ameena.

I decided to refresh my spices before doing any recipe testing.

All fun and games until a turmeric explosion