If there’s no wagon, you can’t fall off 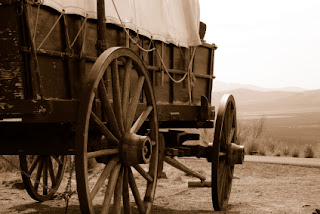 My friend Rebecca (of Beccarama) wrote on her blog about eating a steak. What made this event post-worthy and interesting was that Rebecca is a vegetarian and the post was entitled “falling off the vegetarian wagon”.  Rebecca tells the story of how she initially decided to became vegetarian.  She refers to an article she read about the environmental cost of eating meat. She mentions that meat eating didn’t seem to align itself with other behaviors she engaged in such as sipping from a Sigg bottle and recycling. “This coupled with the disgusting stories coming out about factory farming, hormones, antibiotics and all the rest made it not too difficult to cut down on meat.” While Rebecca says, “cut down” she didn’t eat less meat she ate no beef, poultry or pork for years. Fish remained and therefore she went by the term pescetarian.
I agree with many of Rebecca’s reasons for eating less meat. I don’t eat meat frequently nor do I eat a large portion when I do. I wonder whether eating some grass-fed steak every so often should lead to feelings of guilt or imply you’re less concerned about the environment.  I worry about the various eating camps people place themselves in. I have a friend who is a self-described “fish eating vegan” and another who’s “mostly raw.”  I have a wheat allergy but I never describe myself as “wheat free” or “gluten free” unless asked. I guess I could describe my eating as “Wheat free, pescetarian with occasional grass-fed meat” but that’s just ridiculous.
There are some exceptions that require an absolute and also a label. For those with food allergies it needs to be clear that no wiggle room is tolerated. Although with more people self-diagnosing their allergies even  “allergic” is taken less seriously. Religion also dictates many food rules. However, there are those who “keep a kosher house” but are less strict outside the house. Some Christians don’t observe the food guidelines over Lent. Unless medically dictated there seems to be some leniency.
Aside from the lack of flexibility, I feel there’s something competitive in these food labels. It’s as though vegetarian gets the bronze medal, vegan the silver and raw vegan ooh the gold for sure. Isn’t this odd? Does removing foods from your diet make you a better or  “cleaner” eater or maybe a better person? In my office I see clients who are vegan, others gluten-free or dairy-free. I rarely try to convert someone but rather try to achieve the healthiest food plan regardless of the constraints. Yet others are more exclusive. I’ve had bloggers tell me “I only read vegan blogs.” That’s fine but I feel they’re missing out on some great vegan or vegetable recipes found on other sites.
Excluding something from your diet doesn’t make your remaining food healthy. French fries are vegan and many gluten-free products are nutritionally void. A healthy diet, if that’s what we’re after, can take many forms. If we see eating as a Venn diagram there are many areas in which Rebecca and I or vegans and carnivores overlap. Most of us believe a healthy diet should be vegetable-heavy, that we should cook more or at least know where our food comes from, we should eat less packaged food and sugar and drink alcohol (oh wait, ok I’ll revoke that last one, wishful thinking). As for the wagon, it saddens me to think that someone like Rebecca who enjoys food and makes conscious choices for herself and her family is walking around feeling as though she is “off” or “fell”, wagon or otherwise. Speaking of that wagon, how do you picture it? When choosing a photo I realized I conjure up an image ala Little House in the Prairie or the horse-drawn carriage we once took a ride on in Colorado. I guess it doesn’t matter since I’m advocating going wagon-less.
Do you label your eating? Why do you think these labels are used? Are they necessary?