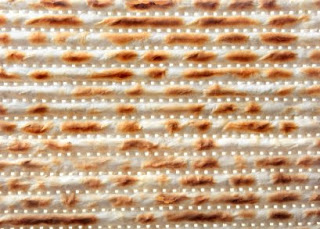 I have to admit, I am not a very religious person. My dad grew up Jewish in Italy and we somehow celebrate Christmas Eve. My mother is the most secular Jew around. I married someone even less religious and he brought a Swedish mother in law and a Jewish father to the diluted religious mix. When we met with a rabbi before our wedding, Marc said and I quote “if religion is like hot sauce with variations of spiciness, I am very, very mild.” Regardless of our lack of temple or church going we still have traditions, food associations with holidays and our grandmother’s recipes. I think most people do.

Last week, I was in a session with a client discussing Passover. For most holidays, I work with clients on creating a game plan for their holiday meals. Passover is especially tricky as matzoh and potatoes are not exactly superfoods. This particular client has older children so their Seder will be small. He and his wife were hosting and therefore in control of the menu. My client, we’ll call him T*, mentioned that in addition to brisket he was considering serving fish as an entrée. T rattled off the other menu items: matzoh ball soup, kugel and matzoh stuffing. I made some suggestions, first I offered up the idea that some sort of a salad or vegetable should possibly be added and second I said “since you have matzoh and matzoh balls, maybe the matzoh stuffing isn’t necessary.” T replied “the matzoh stuffing is my mother’s recipe, it’s a tradition.”

Many of our traditional foods have a great deal to do with what our grandparents and their grandparents had to work with. If you have Eastern European lineage many recipes are high in fat, calories, carbs and cholesterol. Part of this has to do with what was available and part of this has to do with not knowing better. I think there are two schools of thought regarding holidays and nutrition. Some people fall into the “I eat well most days of the year; on holidays I throw caution to the wind.” Others embrace the symbolism of the holiday but try to adapt their holiday meals to their eating habits. I fall somewhere in between. I think traditions and food traditions are very important particularly for children. I like regular, simple stuffing on Thanksgiving and Papa’s Christmas cookies on Christmas Eve (I’m actually not such a cookie person but like the ritual of making and having these cookies around). I don’t however think my grandmother would object to skimming the fat off of the soup or adding a green to her kugel. If Passover celebrates emancipation, can we not emancipate ourselves from egg, potato and matzoh rule and let some other ingredients in? After all, we no longer need extra fat to survive.

I think another issue with traditional recipes is “I’m afraid to change the recipe; it may not come out right!” I completely understand this one. If the whole family likes dense, doughy matzoh balls how will a light and fluffy recipe work? And to this I say, make small changes as these are often undetectable. And you may not want to make an altered version of a recipe the day of the Seder. Another client was working with a healthier macaroon recipe and planned a dry run a few days prior. Or keep one dish, such as the matzoh stuffing in T’s meal, and add in some healthier options around it.

If you think about it, Passover has the potential to be a diet-friendly holiday. For the carb-phobic or gluten intolerant it is a time to abstain from bread (leavened wheat) and also barley, spelt, rye, and oats. In addition, Ashkenazic Jews do not eat rice, millet, corn, or legumes, and there is a concern about eating any type of food that swells when cooked. The more religious turn their houses over keeping only kosher for Passover food. I had to look this up but this symbolizes removing the “chametz.” On one hand chametz refers to non-kosher for Passover foods. On the other hand it refers to removing wrong actions or unhealthy thoughts in order to begin spring with a clean slate. Hmn, now we’re talking.

On Passover part of the Seder is asking of The Four Questions, I have my own 4 questions:
1. Where do you fall on the tradition spectrum, do you feel family recipes should be adapted or adhered to?
2. What are your favorite traditional or family recipes?
3. Do you feel it’s sacrilegious to tweak a recipe?
4. And finally, why are there so many spellings for matzoh (matza, matza)?
Please comment, or I’ll have to ask Elijah.

*Although I use examples from client sessions, client’s privacy protected.