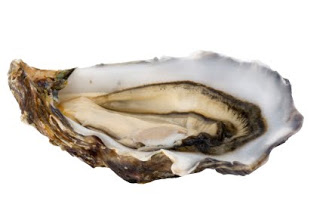 I was doing a TV segment with Chuck Scarborough a couple of months ago on flu-fighting foods. Zinc is an important nutrient for immunity and I mentioned oysters as a food that’s high in zinc. I was prepared to answer questions about the flu, vitamin C and anything else related to staying healthy. I was not prepared, on the nightly news, for Chuck to ask “is it true what they say about oysters?” At the time I brushed it off telling him “perhaps what can make your immune system healthy can make other systems healthy too.” Funny how things work, tonight I will be sitting down with Chuck again answering his original question and talking about truths and myths of aphrodisiacs just in time for Valentine’s Day.

The word aphrodisiac is derived from Aphrodite the Greek goddess of love and sensuality. An aphrodisiac is a food or a drug that arouses sexual desire or enhances sexual performance. Aphrodite rose from the sea on an oyster and the first aphrodisiac food was born. I was surprised, as I researched this segment, the role aphrodisiacs play in every culture from the Aztecs to the Chinese. Let’s see which aphrodisiacs I would classify as myth and which may help you bring sexy back…

Oysters: I think this has to be the #1 alleged aphrodisiac food. There are 2 reasons contributing to this. First, many aphrodisiac foods are what I call “look alike foods. Look alike foods are foods that resemble sexual organs. Oysters are also, as I mentioned, high in zinc. While a deficiency in zinc can cause sexual dysfunction, extra zinc will not help you. As for the look alike reasoning, what a food looks like doesn’t reveal its function. Skinny foods (think French fries) don’t make you skinny and genitalia-shaped foods don’t make you excited. Poor Oysters, I am going to have to put them in the MYTH category.

Champagne and cocktails: If oysters are #1, surely champagne is #2 on this alleged hot list. If we asked people to describe a romantic dinner, chances are champagne would be served. And while alcohol does help lower inhibitions it can contribute to erectile dysfunction and negatively impact testosterone (not sexy). In fact a line from Macbeth said it “increases desire and takes away performance.” Thank you Shakespeare! Certainly any more that 1 glass of bubbly is going on the MYTH list too.

Chocolate: ok so if oysters and champagne aren’t Valentines’ helpers, is the whole chocolate thing myth as well? The aphrodisiac potential for chocolate is based on 2 chemicals it contains. One is tryptophan a building block of serotonin. This is a brain chemical involved in arousal. The other phenyl ethylamine (PEA) is a stimulant related to an amphetamine. PEA increases dopamine centers and stimulates pleasure centers in the brain. The Aztecs seem to be the first to associate the cocoa bean with sexual desire. In fact Montezuma consumed chocolate before romantic encounters but forbade women to consume it. Women, as it turns out, are more susceptible to PEA and serotonin than men. A research team in Italy recently reported women who eat chocolate feel significantly more fulfilled sexually than those who don’t. In my professional opinion,  I would suggest men go out (right now!) and buy some dark chocolate (higher cocoa content) for their mates. Chocolate as an aphrodisiac is TRUE.

Goji Berries: This superfood is considered a potent sexual tonic in Asia. The Chinese have a warning “he who travels over one thousand kilometers from home should not eat goji.” While I am not sure why men traveling less than 1000 km are safe to consume it, after all it is not as if 999 km is an easy distance to rush home when desire strikes. That said, goji berries can improve mood and increase testosterone production. They have a tart flavor and can be purchased at natural food stores. Ladies, forget the watch, wrap up some gojis and happy Valentine’s Day to you. Goji berries, in my book, get a TRUE!

Other foods that make this hot list: chili peppers, ginger, nutmeg, avocados, arugula, fennel and fennel seed and the scent of pumpkin pie spice and vanilla. Now there aren’t heavily funded research studies to support this topic. And this is all quite individual. While some find spices excite them for me it may be my husband unloading the dishwasher. What struck me most about the list of aphrodisiac foods  was that the majority of foods are foods I already tell clients to purchase and eat. It does seem that my quick answer a couple of months ago may be accurate. The foods that make you healthy just may make you horny too. Couldn’t resist that one.