Is Age a Blessing or a Bitch? 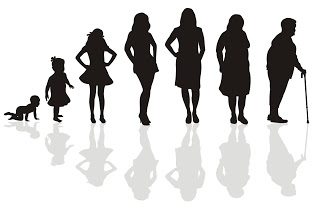 My sister recently had a “big” birthday. Leading up to her birthday, I pressed my mother, sisters and sister’s boyfriend to make plans. Should we have a party? Go away? Chip in for a present? Compulsive planners need to know.  Word was that she wasn’t thrilled about her birthday and didn’t didn’t want a fuss made. I found that so silly; birthdays are blessings.We are all lucky just to be here.  My sister and I both have friends we have lost who haven’t made it to celebrate these days. I joked with my sister’s boyfriend, “so you guys are old, what’s the big deal?” He said he’d check in with me with my time came and we could talk further.
I’m still in my 30s and though I’ve seen those changes that everyone warned me happen at that 35 mark (seems previously “good” parts become cause for concern and “bad” parts remain trouble areas) until recently age wasn’t something I worried about. Perhaps one can only stress and overthink so many things. I have always felt it’s not so much age but the place you are in. I have a career I enjoy, a loving family and I’m healthy (knocking desk).
Well that uncharacteristically grounded thinking was shattered last weekend. We went to dinner at Marble Lane at the Dream Hotel. 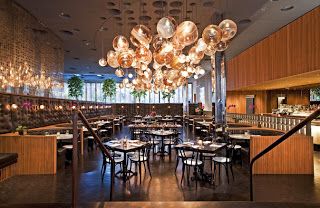 After a delicious meal, we stepped outside to get a taxi.  We stood on the curb as my friend’s husband hailed a cab. After a couple of minutes, three 20-something girls in napkin-sized dresses charged in front (regretfully no photo snapped). Presuming “innocence” he said, “we’re already waiting but you can grab the next taxi.” They weren’t happy, rolled their eyes and said something to the effect of “whatever”.  At first I didn’t react; I was too busy taking in the outfit choices.
My Friend: “Is there a problem? Why the comments?”
Napkin Dress: “Oh my god, why don’t you act your age.”
My Friend: “Excuse me, did you say act your age, not a problem if you can act over 3.”
Neon Yellow Napkin Dress:  “Seriously- you guys are too old to be here.”
That was it, I couldn’t hold back, she called me old and I had a martini in my system.
Me: “Even when I was 20, I wouldn’t go out with my titties on full display. Plus, there’s something called manners.”
There were a few more comments, in a desperate attempt to prove she wasn’t a whore, yellow napkin told us she worked in finance. I may have inquired if she interviewed in that dress, fortunately we were soon in the taxi. We joked about what transpired but I looked at my friends and said, “do you think we were too old to be there?”
I wish I could say I forgot about the Saturday night skirmish but I woke up thinking about it. I went to workout and afterward walked down the street fair on Columbus.  A large sign “Organic Skincare” caught my eye. I chatted up the owner of the company about ingredients and such and asked, “What product would you suggest I start with?” She handed me this 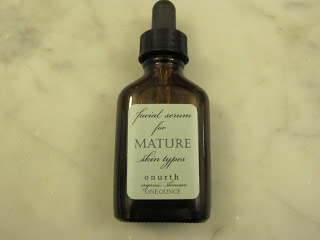 “Mature Serum?” I asked.
“Don’t mind the name” she replied detecting my disappointment “it’s great at any age.”
And so I did what any insulted and panicked person would do, I said “oh sure, I understand, I’ll take it.”
We ended up having a “non birthday” dinner and chipping in for a special present for my sister. Despite her misgivings she was really touched.  I realize we all view age in different ways and you never know when it’ll seem like a blessing or when it’ll be a bitch.
Do you see age as a blessing or a bitch? What would you have done if confronted by the napkin trio? Have you ever been hurt by anyone commenting on your age?
Congratulations to our Indian Cookbook winners Kristen “swankydietitian” and Marie