Is Christie Too Fat To Be President? 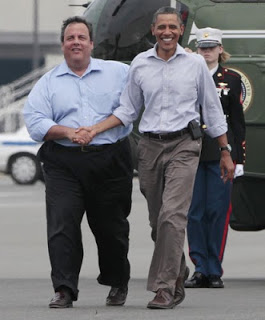 Barbara Walters interviewed New Jersey Governor Chris Christie for her “10 Most Fascinating People” Special. I find it rather fascinating that Barbara is this doing these specials but I digress. I’ll admit, I didn’t watch the special but during the interview Barbara did it. She asked the Governor if he was too fat to run for president.
In the commentary I read/watched and by that I mean the ladies of The View rehashing this, Whoopie, and I love Whoopie mentioned Christie could be a heart attack risk. She expressed that people care about his health. If health were really what people cared about they’d be looking at all candidates genetic predispositions and blood work. Our health risk is not purely determined by our weight; it’s just that weight is easier to see. Nobody was aware that President Clinton had a quadruple bypass hiding beneath his skin. Clinton’s “issues” were hidden, at least for a time. I’ve had too many overweight clients told by their companies “we’re worried about you” and some genuinely are. However, many corporations and even family members are also worried by what the obese person’s weight may say about them.
In the interview Christie cited his around the clock work during Hurricane Sandy as proof of his conditioning. It was during Sandy that many were impressed by Christie perhaps even familiarizing themselves with him for the first time. However, I recall press conferences with Christie hunched over the podium, almost hanging on it. He seemed fatigued and worn. Can we make the assumption this is because of his weight? Christie cannot plead the fit but fat card; in 2011 he was hospitalized for asthma.
I have very mixed feelings about all of this. I’d be omitting how I truly feel if, politics aside, I didn’t think of Christie as a potential president with some concern. As someone who champions wellness and fitness, part of me would wonder what Christie, a 300-pound president, would say to the nation and others as we struggle with an obesity epidemic. And as I type that, I can see the counter argument. We have to be careful that we don’t adhere to a narrow, conventional image for our leaders. There was a time when it seemed to be the president you had to be slim and white and male. Thank goodness we have seen that white isn’t a prerequisite. Maybe accepting someone obese is another way of knocking stereotypes down. Although weight isn’t exactly the same thing as race or gender, weight is technically within our control, which makes it tricky.
With Walters, Christie acknowledged that weight was his Achilles heel. Barbara Walters then really crossed over into stupid question land when she asked the governor “why?” We all have flaws and asking some who drinks or yells why they do it shows ignorance. Perhaps, if I let my optimistic side have a crack at this Christie running would shine a light on weight and work and many important (and some stupid) questions along the way.
Do you think weight, when obese, plays a role in politics? What about other professions? Do you think Walter was justified in asking the original question?
And since we’re talking politics, I thought I’d include these. A group of RDs supporting Let’s Move were in DC in the fall. We’re still trying…