Is Diet a Bad Word? 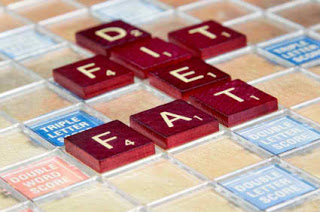 A tweet sent last week from the owner of Green Mountain/Fox Run got my attention. It was a request to sign  “Declaration of Independence from dieting”. I clicked through and found a cleverly reworded declaration. Only, I didn’t find the truths to be “self-evident”

Dieting often demonizes foods making them more appealing as forbidden fruit.
Dieting generates stress and feelings of failure for many.
Dieting is the antithesis of healthy eating.
Dieting results in most people regaining the weight they lost and more
After receiving an “invitation” one has to RSVP, so I tweeted back
@MarshaHudnall @FuelinRoadie I’m all for independence from insanity but not sure “diet” synonymous with unhealthy or misery.
and
@MarshaHudnall @FuelinRoadie some workouts are dangerous but we don’t say don’t workout…about approach not word “diet”
Are we talking master cleanse, Weight Watchers or a vegan diet? Diets, unlike “men” aren’t created equal, I follow a gluten free diet and my eating isn’t “the antithesis of healthy eating.”I’m all for independence from guilt and negativity but “just say no” doesn’t really provide us with a roadmap for what to do. I tried again:
@FeedMeImCranky1 winging it doesn’t produce a healthy relationship with body or food either. For some a “diet” isn’t restrictive but planned.
It seemed to me that diets were getting unfairly treated and lumped together.
Seeking the Canada of language, I consulted Merriam Webster
Definition of DIET
a : food and drink regularly provided or consumed
b : habitual nourishment
c : the kind and amount of food prescribed for a person or animal for a special reason
d : a regimen of eating and drinking sparingly so as to reduce one’s weight It turns out one of those tweeting agreed with me somewhat. Annabel Adams (no relation to John Adams that I am aware of) had this to say:
Annabel Adams ‏‪@FeedMeImCranky1@Foodtrainers nothing wrong with planning & learning (I advocate those things); but the goal for me should always be #health not weight loss
Says who? I want to eat as healthfully as I can and want to look good in a swimsuit, No matter what we sign we’re not going to remove weight loss from the “empire”.I’m pushing for life, liberty and the pursuit of health (or weight loss).  Thankfully, we don’t all have to agree.
Do you think diet is a bad word? Are all diets bad? Can we realistically remove weight from the equation?